What is the 'space bubble' project that cuts sunlight in outer space and stops global warming? Governments and researchers around the world are making various

efforts to stop catastrophic global warming. Current efforts are not sufficient to limit climate change. Therefore, researchers at the Massachusetts Institute of Technology (MIT) are advocating a ' space bubble ' project that turns their attention to outer space instead of the earth and cuts sunlight with a reflective film deployed in outer space. In recent years, the anthropogenic emissions of greenhouse gases such as carbon dioxide and methane have led to global warming at a geologically unprecedented rate. Efforts are being made to reduce greenhouse gases around the planet, but it may already be too late for these efforts.

Therefore, what is attracting attention is not mitigation measures such as greenhouse gas reduction, but geoengineering (geoengineering) that artificially manipulates the earth's climate. However, if geoengineering solutions such as carbon sequestration and aerosol release are implemented on Earth, there are concerns that they will have a significant impact on ecosystems.

In response, an interdisciplinary research team at MIT is seriously considering a space-based solution to ``deploy a shield in outer space to reduce sunlight''. According to the researchers' calculations, it seems that it is possible to completely reverse today's global warming if we can reduce solar radiation such as sunlight falling on the earth by 1.8%. 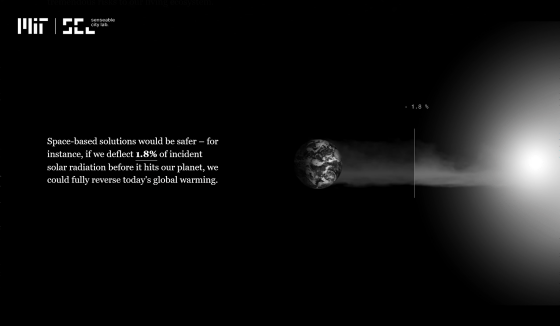 The MIT research team argues that the most efficient thin-film structure for deflecting solar radiation in outer space may be a 'bubble'. They have already succeeded in creating a stable solid thin-film spherical shell with a thickness of 500 nm in a vacuum chamber at -50 degrees.

Lagrangian point where the gravitational forces of the Earth and the Sun balance. 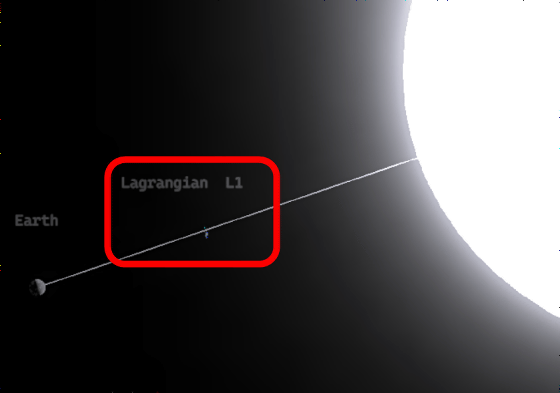 When multiple space bubbles are connected, the size is expected to be about Brazil. The materials and feasibility of the space bubble are unclear, and the research team is in the process of coming up with ideas in the hope that future research will be possible with additional funding. Professor

Carlo Ratti , Planning Director at MIT's Senseable City Lab , said: 'Taking solar shield feasibility studies to the next level will help us to develop more geoengineering approaches if and when they become necessary in the coming years. We believe it will help people make informed decisions.” Scientific media Science Alert points out that it is possible to block solar radiation using bubbles made of homogeneous material like molten silicon. Also, compared to the method of folding a huge cloth or umbrella and transporting it from the earth, it is more cost-optimized to inflate the bubbles on site, and the evacuation when an unexpected problem occurs is just to break the bubble. He says it's easy. On the other hand, Paul Sutter, a writer for space-related media Universe Today, commented, 'I'm personally quite skeptical.' In addition to questions about materials and feasibility, the space bubble must withstand obstacles such as the pressure of solar radiation and micrometeorite impacts, and the long-term impact of blocking sunlight is also unclear. claims.

Both Science Alert and Universe Today point out that the idea of a space bubble does not change the fact that greenhouse gases continue to adversely affect the climate and ecosystems. He said we need to stay focused on the fundamental challenge of reducing greenhouse gas emissions and not get caught up in flashy projects.

The idea of ``blocking sunlight to prevent global warming'' has existed for a long time, and in the late 1980s, it was proposed to deploy a large parasol near the Lagrangian point. Other methods such as `` sprinkling sulfur dioxide in the stratosphere '' and `` spraying calcium carbonate powder in the atmosphere '' have been devised.