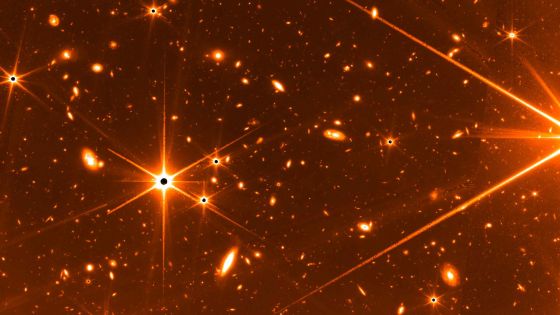 After being launched into space in December 2021, the

James Webb Space Telescope developed by NASA has been adjusting the primary mirror while sending multiple test images to the earth. The first captured image of the James Webb Space Telescope after full-scale operation is scheduled to be released on July 12, 2022 (Tuesday), Japan time, but a preview image was released prior to the official release.

The state-of-the-art James Webb Space Telescope has been adjusted, and the comparison with the previous generation is a masterpiece --GIGAZINE Even after the adjustment of the primary mirror was completed, the equipment configuration was advanced toward full-scale operation of the equipment in the summer of 2022. In late May 2022, there was an accident in which a meteorite larger than the expected size collided , but it did not lead to a major problem and on July 12, 2022 (Tuesday), Japan time. It has been decided that the first color image will be released after full-scale operation.

The James Webb Space Telescope is equipped with multiple sensors for capturing celestial bodies. NASA will release the image taken during the test of the sensor ' Fine Guidance Sensor (FGS) ' which has the function of 'locating and tracking the target celestial body' among multiple sensors on July 12th. I released it in advance.

Below is an image taken with 72 exposures over 32 hours using FGS. According to NASA, images taken with FGS are not used for scientific analysis and are usually discarded. Still, NASA describes the test image as 'the deepest image of the universe ever taken,' highlighting the high performance of the James Webb Space Telescope. You can check the high-resolution images released by NASA by clicking the images below. We can't contain the excitement for @NASAWebb's first full-color images!

On Monday, July 11 at 5pm ET (21:00 UTC), President Biden will unveil one of the space telescope's first images of deep space as a preview of what's ahead: https://t.co/kP5JdQEpVz pic.twitter.com / 1wFZGkqrx8

The color image release on July 12th and 13th will be broadcast live in the following embedded movie.