Life hack introduction movies that summarize useful techniques in daily life are very popular on movie posting sites such as YouTube and TikTok, but some of the introduction movies contain dangerous acts that lead to fires and fatal accidents. doing. In particular, a technique called ' Fractal burning ' that applies high voltage to wood to draw

fractal figures has been reported to have caused at least 33 deaths. However, on YouTube, the post that informs the danger of 'Fractal burning' has been deleted, which has become a big topic.

'Fractal burning' is a method of burning a complicated pattern on wood by applying a liquid such as sodium carbonate aqueous solution (baking soda water) to the wood and applying a voltage. 'Fractal burning', which requires high voltage, is too dangerous for an amateur to perform, and the American Association of Woodturners , an American woodworking industry support organization, has had at least 33 fatal accidents due to 'Fractal burning'. I am reporting that I am. However, at the time of writing the article, if you search for 'Fractal burning' on YouTube, you will find a lot of posts that explain the work procedure. In the explanation movie of 'Fractal burning' posted on YouTube, a movie 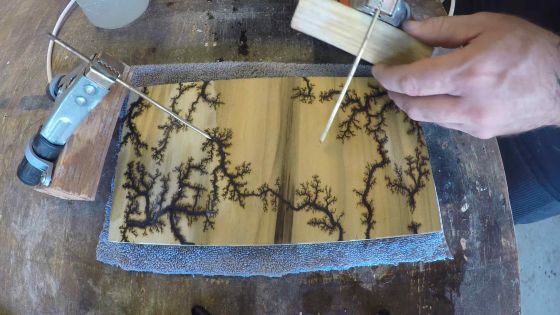 Ann Reardon, who runs the cooking YouTube channel ' How To Cook That ', released 'a movie that tells the current situation that'Fractal burning'is causing many fatal accidents and informs the danger' in June 2022. I posted it on YouTube. The movie posted by Mr. Riadon also made known dangerous life hacks other than 'Fractal burning', such as 'a case where a fire broke out as a result of referring to a life hack movie of grilling meat with a pop-up toaster', but YouTube Judged Mr. Riadon's movie as a 'harmful movie' and stopped publishing it.

In the news that Mr. Riadon's movie was suspended, 'My 12-year-old child imitated' How to make cheese toast 'that I saw in the life hack introduction movie and put bread and cheese on a pop-up toaster. As a result, the child himself is about to become a 'cheese toast' (a fire broke out). '

In addition, Mr. Riadon's movie, which had been suspended by YouTube, has returned to a playable state at the time of article creation.