Finally succeeded in archiving Square's phantom game '3156 Korokoro', which had been missing for over 30 years 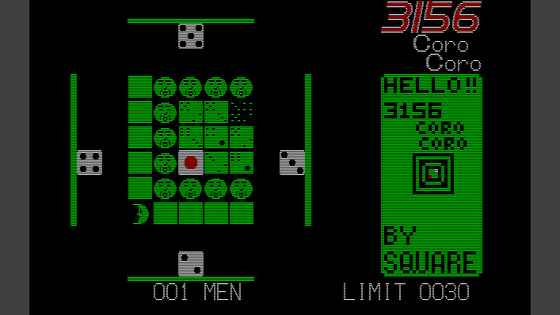 Chris Kohler, editor of Gaming Alexandra, who summarizes the history of the game and valuable materials, said that one of the games that was scheduled to be released from Square more than 30 years ago, but was not released after all `` 3156 Korokoro'' Has been confirmed and reported to have been successfully saved.

While investigating the history of Square, Mr. Kohler got a list of software that was planned to be released on Square but was not released after all.

Square was the predecessor of the software development department of an electrical construction company in Tokushima Prefecture in 1983, and became independent as Square Co., Ltd. in 1986. 3156 Korokoro is one on the list that Mr. Kohler got, and it is a game for the PC-8800 series . It is said that this work was created by Hiromichi Tanaka , who was a staff member before Square became independent as a corporation, and was a director of 'Trials of Mana 3 ' and a producer of ' Xenogears ' and ' Chrono Cross ' at the age of 22.

These are the first images of it that have been seen in years! Pic.twitter.com/ZAyPUzzurw

Originally, it was a title that was lost without being released, so it is impossible to play 3156 Korokoro. However, Mr. Kohler learned on the Japanese website that 3156 Korokoro was a game produced for the 'Program Olympics' project of the magazine ' LOGiN ' published by ASCII at that time. In other words, although it was packaged and not sold, the game itself was published in a magazine in the form of a code.

So, Mr. Kohler searched around the October 1985 issue of LOGiN, which contains the code of 3156 Korokoro, and finally succeeded in obtaining it. He said that he scanned the code posted, converted it to OCR, dropped it into the T88 tape image file format, and made it work with the emulator. To give as much context as possible, I did a (quick, messy!) Translation of the LOGiN magazine article that accompanied the game.

I still haven't finished the final level, so maybe you can be the first person to finish it in 37 years! Pic.twitter.com/qAYMrX9LPA

Gaming Alexandra said, 'Japanese PC games are an undeveloped and resource-deficient area. Especially because they form the basis of the Japanese home video game industry and some of the most popular games in the world. It's very important. It's very interesting that the game produced by world-renowned publisher Square has been missing for so long that even experts would consider it unreleased. What other treasures? Is there any left? '