An exploration project for a 'planet that humans may be able to live in' near the solar system is underway in China, and will the space telescope be launched in 2026? 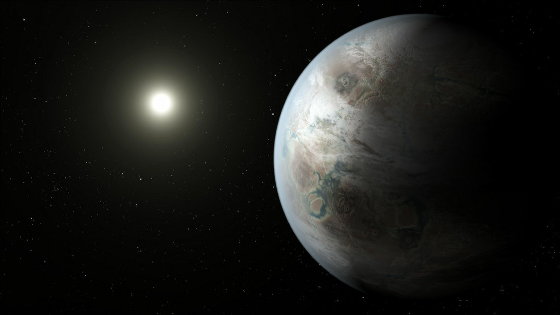 A research team led by the Chinese Academy of Sciences has proposed a project to explore extrasolar planets within about 33 light-years from the solar system and search for 'planets that may be habitable by humankind.' The project, named 'Close by Habitable Exoplanet Survey', will use a space telescope to survey about 100 stars and find planets orbiting them. is. 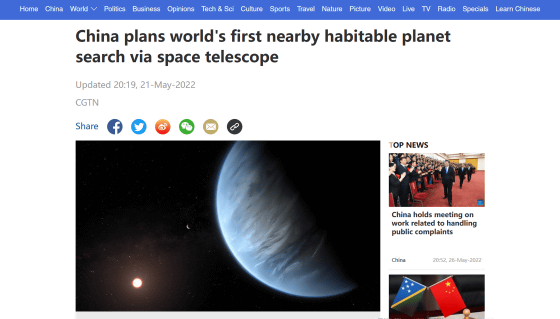 Exploration of extrasolar planets is one of the important frontiers in astronomy, and as many as 5035 extrasolar planets have been confirmed at the time of writing, but unlike stars that emit light by themselves, they are far away from planets that do not emit light. Exploring from the solar system is a difficult task. Therefore, Ji Jianghui, a research professor at the Chinese Academy of Sciences' Purple Gold Mine Observatory , is proposing a project called 'CHES' to launch a space telescope and explore habitable exoplanets that are relatively close to the solar system.

Generally, the ' transit method ' is used in the exploration of extrasolar planets to confirm the existence of planets from the change in luminosity that occurs when the extrasolar planet crosses the front of the main star (star). However, the transit method cannot be observed unless the exoplanet crosses in front of the main star, and it is said that the detection of the exoplanet is limited to information such as the radius.

On the other hand, CHES uses a technique called ultra-high-precision astrometry (astrometry) . In this method, the absolute positions of multiple reference objects in the celestial sphere to be observed are first measured, and then the relative positions of the target stars are observed. Since the position of a star causes a slight wobble due to the gravity of the revolving planet, it is possible to accurately measure the orbit and mass of the revolving planet from this relative position wobble.

According to Ji, if there is a planet that orbits a solar-type star about 32.6 light-years away from the solar system at the same distance and mass as the Earth with respect to the Sun, the star's orbit will wobble by 0.3 microseconds . That thing. The ultra-high-precision relative astronomical method used by CHES can detect such subtle orbital changes by measuring the relative positions of the target stars with respect to 6 to 8 reference stars. Ji insists. 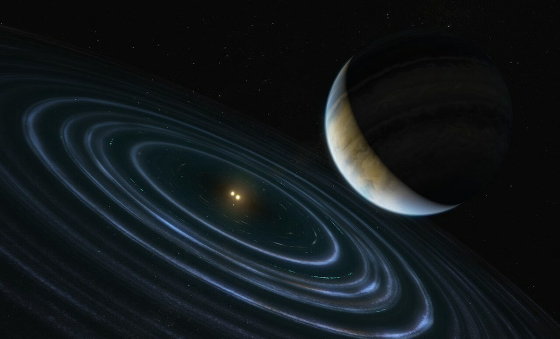 CHES uses a 1.2-meter caliber optical space telescope with a mosaic CCD device and laser measurement technology to accurately measure the position of celestial bodies at the Lagrange point , which is gravitationally stable between the sun and the earth. We are planning to launch it into a halo orbit that orbits (L2) .

The halo orbit is not affected by the aging motion of the earth or the atmosphere, and the heat radiation environment is relatively stable, so it seems that it is possible to suppress fuel consumption and operate the space telescope for a long time. At CHES, by observing 100 stars relatively close to the solar system with a space telescope for 5 years, we will observe about 50 planets with a size and orbit similar to the earth and super earth with a mass several times that of the earth. Expected to find.

Ji argues that unprecedented observational accuracy must be achieved in order to use astronomical metrology to explore habitable planets. 'Our astronomical observations do not constrain the orbital plane of the planet. It can detect planets in any orbit and directly measure the mass of habitable planets, so it is a comprehensive set of planets orbiting nearby solar-type objects. Exploration can be realized. '' These studies will eventually answer questions such as 'Is our solar system special?' And 'Are we the only ones in the universe?' It will lead to a deeper understanding of evolution, and the whole origin of nature and life, and a deeper understanding of myself. '

So far, preliminary research on the feasibility of CHES has been conducted by various research institutes in China, and astronomers around the world will be invited to participate in the project. The decision on financing is expected to be made in June 2022, and hopefully it will start moving toward the launch of the space telescope in 2026.