Research by YouGov, a market researcher and online surveyer, found that there are a certain number of Americans who think they can beat beasts such as bears, lions, and elephants with their bare hands.

Rumble in the jungle: what animals would win in a fight? | YouGov

Which animals could Britons beat in a fight? | YouGov
https://yougov.co.uk/topics/lifestyle/articles-reports/2021/05/21/which-animals-could-britons-beat-fight

From April 12th to 13th, 2021, YouGov conducted a survey of 1224 Americans over the age of 18 to see if they could win by fighting various animals with their bare hands.

The result is below. Rats (72%) were the most likely to win, followed by domestic cats (69%) and geese (61%). In addition, 8% of Americans boasted that they could beat beasts such as gorillas, elephants, and lions with their bare hands, and even the lowest percentage of grizzly bears said that 6% could win.


Regarding this result, YouGov seems to think that 'overconfident or daredevil, 6% can defeat grizzly bears like

Hugh Glass played by Leonardo DiCaprio in the movie The Revenant: The Revenant '. However, I used a dagger instead of my bare hands for the glass. '

There was almost no difference between men and women in that they thought they could beat the beasts. The following is a diagram showing the percentage of people who answered 'win' by gender of the respondents. Animals with a 21-point difference between men and women, such as medium-sized dogs (60% for men vs. 39% for women), and women who think they can win, such as King Cobra (23% vs. 8%), are three minutes more than men. Some animals were 1 but only 1 point was different for gorillas, elephants, lions, and hyilogmas. Moreover, when it comes to lions, females outnumber males. 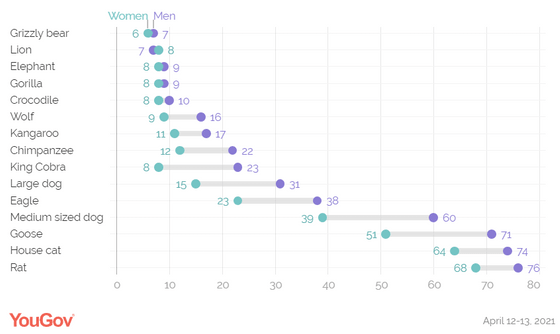 By the way, when YouGov asked the British a similar question, the number of people who were confident of winning wild animals decreased overall, but 2% of people still think that they can beat grizzly bears and elephants. The result was that.