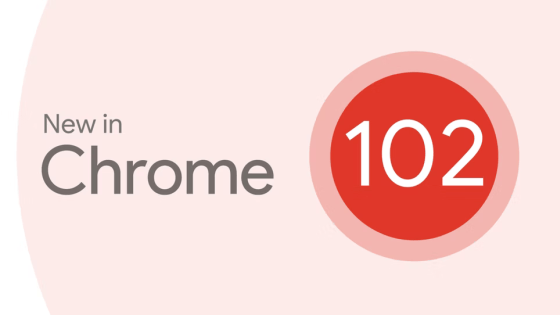 Version 102.0.5005.61, the latest stable version of the web browser 'Google Chrome', has been released. The side panel of Google Lens, which had been secretly released on the desktop version of Chrome for several weeks, has been officially released.

◆ Google lens side panel
The

Google Lens side panel has been implemented in the desktop version of Google Chrome, and the results of searching images with Google Lens are now displayed in the side panel in the same tab.

Google Lens now opens as a side panel in desktop Chrome --9to5Google
https://9to5google.com/2022/05/24/chrome-google-lens-panel/

To take advantage of this feature, first open the page in Chrome and right-click on the image in it. A pop-up menu will appear, from which you can select 'Search images with Google Lens'. Then the side panel of Google Lens will be displayed on the right side in the same tab. In the side panel of Google Lens, 'Search' is selected by default ...

Scroll down the side panel to see a list of 'appearing match' images. If you check it, you can see that the manga 'My husband smells garlic!' Is displayed at the top of the list.

You will be able to select and copy the text in the image.

Select Translate to translate the text in the image and copy the result.

In this way, you can now use the functions of Google Lens more closely.

Besides that, various changes have been made to Chrome 102, the details are as follows.

◆ Deprecation / removal of WebRTC Plan B
SDP (Session Description Protocol) is used as a procedure for establishing a connection with WebRTC (Web Real-Time Communication), but there are two standards for WebRTC, Plan A and Plan B, depending on the description method. , Each is not compatible. WebRTC has become a W3C Recommendation in the process of web standardization, in which Plan A has been designated as the Unified Plan (standard). In response to this trend, Plan B can no longer be used in Safari, Firefox, etc., and Chrome will follow suit with this release.

◆ Add Save-Data client hints
The already implemented Save-Data header can now serve as a formal client hint by adding a newly implemented CH-Save-Data permission policy. This header can be set to an On or Off value, and if On is specified, various techniques to reduce the data sent to the client (use of smaller alternative resources, disabling polling and automatic updates, etc.) ) Is taken.

◆ Addition of AudioContext.outputLatency
The read-only property of the AudioContext interface , outputLatency, indicates in seconds how much the output of the current audio content lags from the playback instruction. This feature is needed to adjust / correct the latency from input to output, which is very useful, for example, when synchronizing video and audio. This feature has already been implemented in Firefox, but with this release it will also be enabled in Chrome.

◆ Capture handle
This feature allows you to work together between 'capturing apps' and 'captured apps'. This function is supposed to be used, for example, to share the presentation screen on the meeting screen, and it is easy to understand the outline by actually touching it on the following demo site.

Demo VC (don't capture)
https://w3c.github.io/mediacapture-handle/identity/demos/remote_control/capturer.html
* You need to open it on Chrome 102 or later, or Chrome 92 or later with Origin Trial enabled.

When you open the demo site, the screen corresponding to 'Capturing apps' opens. If you press the 'Launch Presentation' button here ... 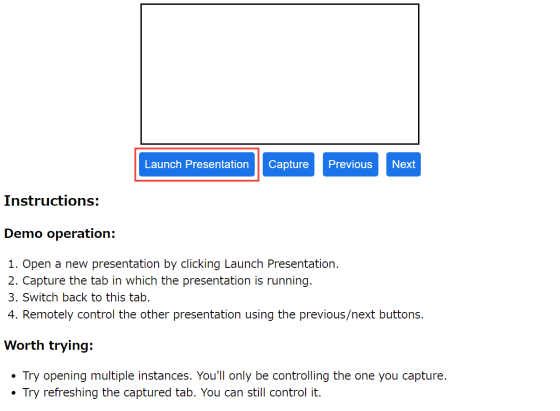 The screen corresponding to 'Captured apps' will open in a separate tab. This screen seems to be an image of a slide for a presentation. 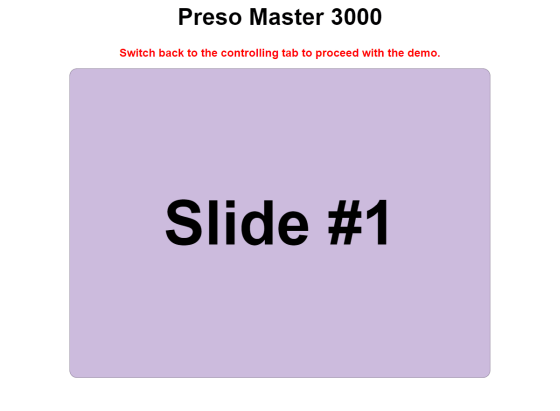 When you return to the screen you opened first and press the 'Capture' button ... 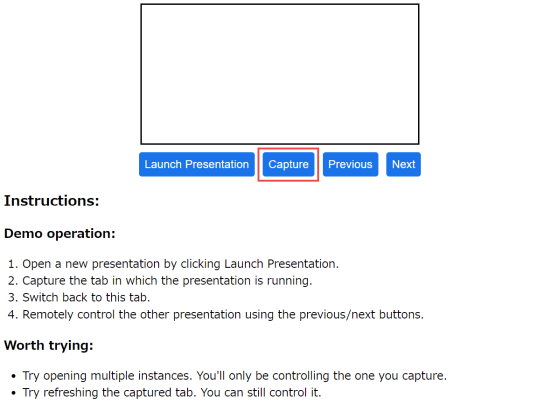 A pop-up that says 'Choose what to share' appears. If you select 'Demo Presentation (CAPTURE ME :-))' from the Chrome tab and press the 'Share' button ... 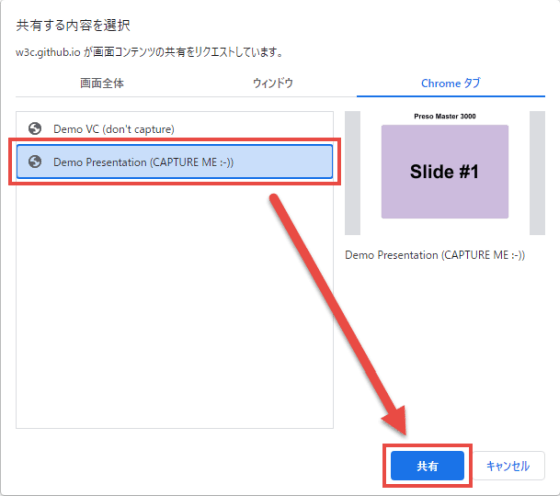 Cooperation will start between the two screens. By pressing the 'Next' / 'Previous' buttons on the screen on the side of the capture ... 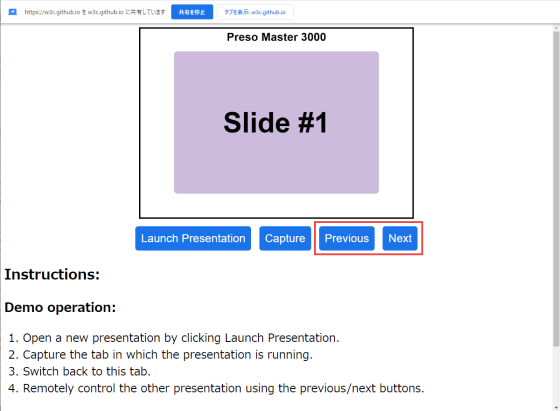 You can switch the slides on the screen on the side being captured. Since the slide screen does not have a function to switch, it means that the function is added on the capturing side. 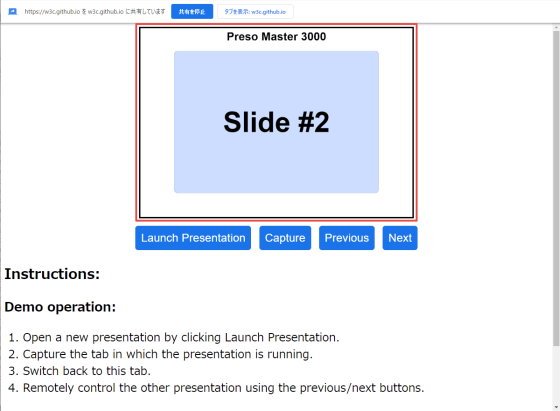 This slide switching is done by sharing the screen, so if you look at the slides on the captured screen, you can see that they are switching as well. 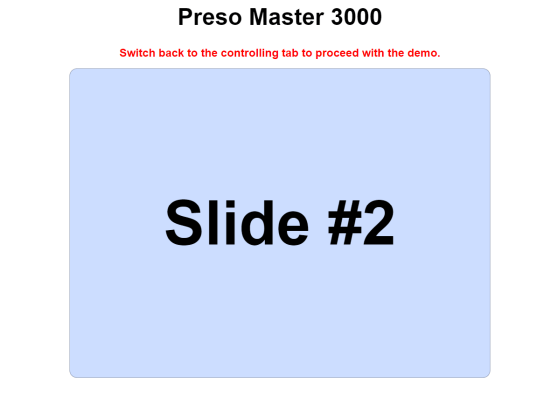 The key to this mechanism is that if a particular part of the message is included in the capture, it provides the confidence that it is not spoofed .

◆ Added until-found value and beforematch event to hidden attribute
Previously, the hidden attribute was either specified (hidden) or unspecified (displayed), but a new until-found value will be added. The HTML element with hidden = 'until-found' is hidden by default, but when the character string contained in the element is searched, the entire element is displayed at the same time as the hit. At this time, the beforematch event will be generated and you will be able to handle it with JavaScript.

◆ inert attribute
An alert attribute has been added that allows you to specify part of the DOM tree as inactive. If the user raises an input event for a node with this attribute specified, the browser behaves to 'ignore' it.

◆ Navigation API
The window.navigation API is provided as an even more convenient alternative to the existing window.history and window.location. When creating a web-based single-page application, it is difficult for the application to grasp the state transition because the original web mechanism is premised on page transition, and engineers have used various hacks (using JavaScript) so far. We have addressed this issue using techniques such as manipulating the History API), but in some cases (moving to previous / next pages, reloading, etc.) there is a risk of losing sight of the situation and deviating from the expected flow. .. The Navigation API is now available as a solution to this.

◆ Secure Payment Confirmation API V3
Three features have been added to the Secure Payment Confirmation API, identifying the API as “V3”.
-Certificate user ID will be added as a required input item.
-If the download of the icon indicating the payment method fails, iconMustBeShown will be added to optionally enter a Boolean value as to whether to allow the situation where the icon cannot be displayed.
-PayeeName is added as an option input.