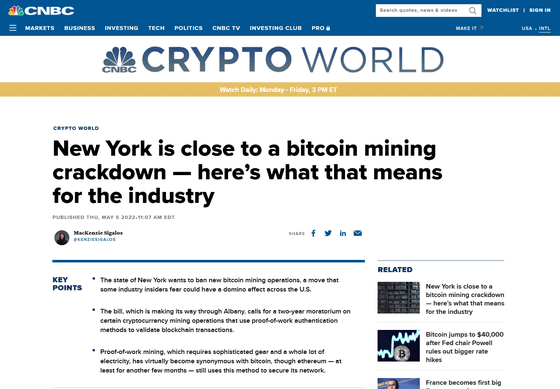 The bill says that cracking down on mining, which uses a lot of electricity generated by fossil fuel-powered power plants, will help curb carbon dioxide emissions in the state. The time limit is two years, and new entry or expansion of the mining business is not permitted unless 100% renewable energy is used.

The target is virtual currencies that use 'PoW' as the mining algorithm. Due to its mechanism, 'PoW' requires a huge amount of calculation and consumes a large amount of power for mining. If it is a relatively new virtual currency, '

Proof of Stake (PoS)' which consumes 99% less power than PoW is adopted, and Ethereum has also decided to shift from PoW to PoS in the latter half of 2022. Therefore, it can be said that it effectively regulates Bitcoin mining. 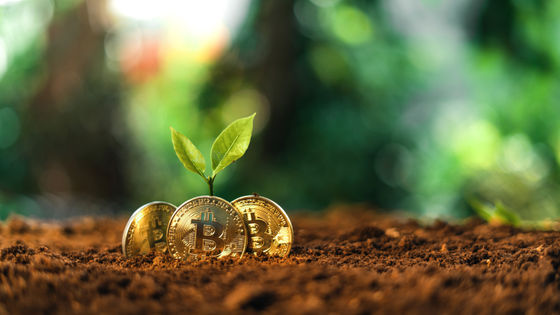 The bill has passed the House of Representatives and is under deliberation in the Senate. If passed by the Senate, Governor Kathy Hochul will be given the option of signing the bill or vetoing it.

In New York, in 2018, the northern city of Plattsburgh temporarily enacted an ordinance banning mining operations. There was a move to expand this throughout the state in 2021, but there is a trend that it ended in failure because the union of electric workers defended the mining industry.

New York is a good place for mining because of its low electricity bill and cold climate. Coinmint, a mining company, is turning its former aluminum smelter from global aluminum maker Alcoa into a mining plant that uses cheap electricity from abundant wind power and hydroelectric power from the St. Lawrence River. .. This facility has a transformer capacity of 435 MW and is said to be one of the largest in the United States.

The mining industry has voiced opposition to the regulatory movement. 'The mining job will be taken away by other states and the economy of New York will be weakened,' said Amanda Fabiano of asset management company Galaxy Digital. Kevin Chan of the digital currency investment company Foundry said, 'Foundry has invested more than $ 500 million in mining equipment, but due to the disadvantage, less than 5% of the equipment is installed in New York. '. In fact, New York's share of the mining network has already dropped from 20% to 10% in recent months.

Perian Boring, founder of the Chamber of Digital Commerce, a cryptocurrency promotion organization, said that less than 60% of the world's mining industry uses sustainable energy, which is 80% in New York. He points out that it is close, and argues that the mining industry has the potential to lead the transition to sustainable energy. John Warren, CEO of mining company GEM Mining, warns that 'state regulations could curb the business of renewable energy-based miners, given the potential for further tightening.' ..

Bowling also said that New York has become a model for the 'blue states' with many Democratic supporters, so if the bill is passed in New York, other 'blue states' may follow suit. It states that there is.

Meanwhile, before the bill was passed, it was clear that New York was hostile to the mining industry in the first place, said Darin Feinstein, co-founder of blockchain venture Core Scientific. Mr. Stein. Finestein said that mining is essentially a data center business, and that data centers should be deployed wherever they want to be installed, as mining-friendly states in Georgia, North Carolina, and North. Names Dakota, Texas, and Wyoming. He added that if you are doing business in an unfriendly state, you will need to take appropriate action.

The state of Texas, named by Feinstein, is famous for having mining-promoting lawmakers, providing the mining industry with surplus renewable energy and natural gas. 'Texas is loosely regulated and the industry is easy to predict,' said Alex Brammer of the crypto pool Luxor Minig.

Lee Bracher, chairman of the Texas Blockchain Council, said that if regulations were to take place in New York, the Bitcoin industry would only move to a state that understands the incentives.