In recent years, many products, including smartphones and tablets, are powered by batteries, and battery life and replaceability are extremely important for user convenience and environmental protection. On March 10, 2022, the European Parliament , the EU legislative body, adopted a rule mandating 'allowing the removal and replacement of batteries in products with batteries'. Many products such as smartphones, tablets, PCs, electric bicycles, cleaning robots, and wireless headphones are powered by the built-in battery, and when the battery is exhausted, the original performance of the product cannot be exhibited. Many of the products with built-in batteries have a structure that does not assume replacement of the battery from the beginning, and it is necessary to replace the entire product when the battery is exhausted.

The fact that battery life substantially affects product life is regarded as a problem in terms of user convenience and environmental impact. Frankfurter Allgemeine Zeitung , a German newspaper, said the battery market is expected to reach € 250 billion in 2025, but battery recycling rates and replaceability remain low. Pointed out. In addition to the environmental burden that has been regarded as a problem so far, the importance of battery regulations is increasing due to the vulnerability of raw material procurement exposed by Russia's military invasion of Ukraine.

In the EU, rules have been discussed since 2020 that require products such as smartphones to have a 'removable battery'.

All iPhones may be forced to have a 'removable battery'-GIGAZINE 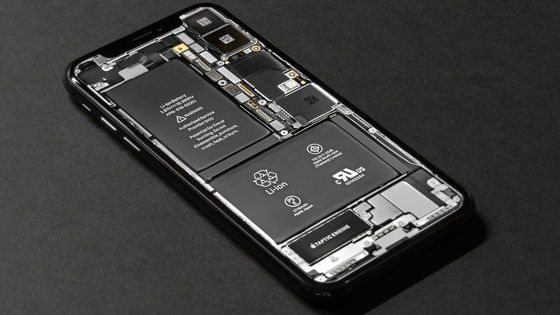 And at the European Parliament on March 10, 2022, a new EU regulation on batteries and battery waste was adopted by a majority in favor. In addition to visualizing the carbon footprint in the process of battery manufacturing, collection and recycling, recycling raw materials, and clearly indicating battery performance and durability, the new regulations also require 'replaceable batteries'. .. As a result, companies are prohibited from incorporating the battery in the main body so that it cannot be removed, and it is also required that the replacement battery be available for 10 years or more after the product is put on the market.

By the time the new battery regulations come into effect, they will need to be adopted by the Council of the European Union , which has stronger authority than the European Parliament, and the legislation in each member country will need to be adjusted. Right to Repair Europe, the media on 'rights to repair,' may have a battery replaceable in 2026 or later for all products sold in the EU, including a grace period for the industry. Said there is.