Walt Disney Animation Studios, which has a history of 100 years, is releasing 'How to make an animated film' Studios , one of Walt Disney Studios' major animation production divisions, which has been producing feature-length animated films for nearly 100 years from 1923, has created a ' Filmmaking Process ' that explains how to make animated films. It is open to the public.

Walt Disney Animation Studios first explains 'how an animated film is organized'. Not limited to animated films, the minimum constituent unit of a movie is the ' cut ' from the start to the stop of the camera film. One delimiter made by collecting these cuts is a ' sequence '.

The show time of ' Encanto and the House Full of Magic ' is 90 minutes and 28 seconds, and consists of 40 sequences. Each sequence has a minimum length of 24 seconds and a maximum length of 6 minutes. For example, the musical part of 'Encanto and the Magical House', 'Mysterious Madrigal House' is a sequence of less than 5 minutes and consists of 82 cuts. The length of each cut is 3 seconds at the shortest and 4 minutes at the longest.


An image is a mechanism that makes a still image (frame) appear to move by being continuous. 'Encanto and the house full of magic' is composed of 24 frames per second like a general movie, so one frame is displayed for about 0.04 seconds. 'Encanto and the House Full of Magic' consists of a total of 133,709 frames. In addition, 'Encanto and the House Full of Magic' also supports 3D screening. Since 3D is expressed using the left and right parallax, the frame for the right eye and the frame for the left are slightly different. Therefore, if it is a 3D screening version, the total number of frames will be 267,418 frames, which is twice that of the 2D version.

Since all the animation production in the old days was hand-painted, the animator had to draw all the hundreds of thousands of frames by hand, which required a lot of labor and time. However, modern animated filmmaking uses 3DCG technology, as well as sophisticated software and efficiency-focused systems, so you don't have to hand-paint every frame. Disney Animation describes the production process of modern animated films in three major categories: 'Development,' 'Asset Creation,' and 'Shot Production.'

pre-production , which is the part before the actual shooting in movie production. Create a story by elaborating the world view, and think about the design of the character and the stage of the work. To that end, we will actually visit various places around the world, delve deeper into culture, history, science, and technology, and work with experts to gather information that will give hints to the script and design.

The story is constructed by drawing not only letters but also storyboards (storyboards). Multiple staff, including directors and writers, work together to determine the rough screen composition and timing at the storyboard stage.

Storyboards are the cornerstone of Disney's animation production, which has been around for nearly 100 years. In the past, storyboards were drawn directly on paper and shared, but nowadays, a dedicated application called '

Story Pad ' has been introduced on the iPad, creating an environment where storyboards can be easily created and shared anytime, anywhere. And that. 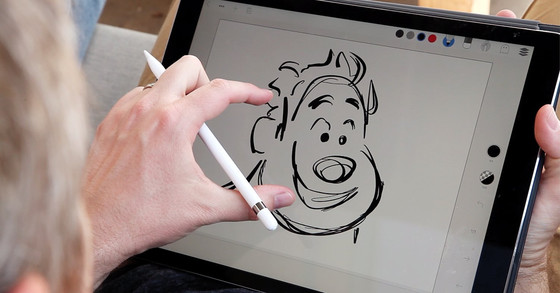 Various tools are used for easy

visualization of pre-visualization by connecting storyboards created with StoryPad. Basically, it is said that you purchase and use tools that are easy to use, but it seems that you often use dedicated applications customized to meet the unique needs of Disney animation studios or tools developed independently. Music and editing are also important for Disney animation to create a story. Video editing is indispensable for making the movie that the director wants to make, and BGM and sound effects bring consistency to the atmosphere of the work. The editorial and music staff will be key members of Disney animation filmmaking from start to finish. 'Asset Creation' is mainly 3DCG creation to create an actual image from a storyboard. In recent years, VR devices have also been used, and cutting-edge technology is used to create images created by creators. The characters and environment that appear in the movie are complicated, and in order to bring each one to life, it is said that its own system and software are used. For example, '

Tonic ' used by artists to create unique hairstyles for characters, 'XGen' to express stitches and embroidery on character clothes, and ' XGen ' that simulates muscles and soft tissues to create characters. Technology teams are working with artists to develop new solutions, such as PhysGrid , which creates complex movements. 'Shot Production' is the production of the scenes that make up a movie. The animator gives the 3DCG the actual movement based on the storyboard and acts on the character. From rough movements to changes in facial expressions that represent the subtleties of emotions, animators mobilize their knowledge of anatomy, physics, movement, and charm to create images.

In addition to simply adding motion to the 3DCG model, you can create a more natural and expressive screen by fine-tuning the camera movement, composition, texture, and lighting to render.

Hyperion ' developed within Disney. Hyperion is a tool for performing 'path tracing', which is real-time rendering by ray tracing, and requires a very high-performance machine, so Disney has a large amount of data storage and a high-performance dedicated workstation. I am.

The following is a movie in which Disney explains the importance of path tracing in animated films.


Then, as the final finishing touch, we will perform 'post-production' by superimposing the video and audio to make it look like a movie. In addition to just overlaying images, you can also edit images and music, add sound effects, add digital processing, adjust colors, and more. It takes an average of 3 to 5 years for a movie from the state of the storyboard to the completion of the final frame. In addition, 'Filmmaking Process' introduces various other tasks performed in each process, including movies. The content is quite voluminous, so if you are interested, please check it out for yourself.