5.1K / 50fps movie shooting review with the high-spec drone 'DJI Mavic 3' that has both amazing flight performance and a high-quality camera 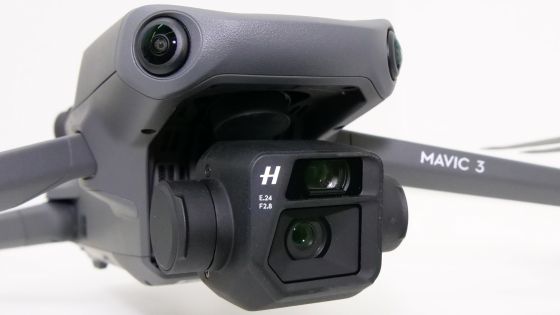 The drone ' DJI Mavic 3 ' that appeared from DJI in November 2021 is equipped with a 4 / 3-inch CMOS sensor of the same size as the sensor used for mirrorless interchangeable-lens cameras, etc., and is a movie with a maximum of 5.1K / 50fps. It is an ultra-high performance drone that can shoot. After the

photo review and flight performance check , I actually shot the movie at the end and tried to see how high quality the movie can be shot.

◆ 1: I tried shooting a 5.1K / 50fps movie with DJI Mavic 3.
As mentioned above, the 'DJI Mavic 3' is equipped with a large sensor that can shoot movies up to 5.1K / 50fps. The resolution and frame rate of the movie to be shot can be set by tapping the red frame at the bottom right of the screen with the drone management application 'DJI fly'.

The 5.1K / 50fps movie actually shot with 'DJI Mavic 3' is as follows. Blurring is generally noticeable in high-resolution movies, but the DJI Mavic 3 is equipped with a 3-axis motor gimbal, which significantly reduces blurring.


In addition, the exposure compensation was excellent, and the details of the clouds could be reproduced without overexposure even in the composition where the sun framed in as shown below. 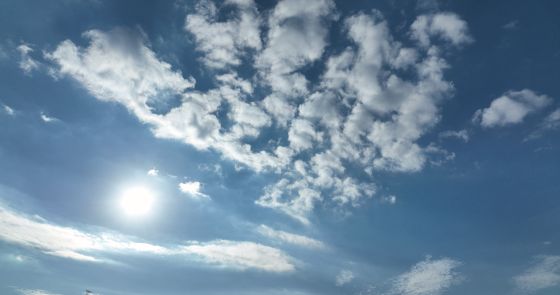 ◆ 2: I checked the zoom performance of DJI Mavic 3.
The 'DJI Mavic 3' is equipped with a zoom sub-camera, enabling up to 28x zoom shooting. To use the zoom function, tap the telescope icon displayed on the right side of the 'DJI fly' screen.

Below is a picture of the same subject taken from the same position using the zoom function. At 1x magnification, a main camera equipped with a 4 / 3-inch CMOS sensor is used, and its focal length is 24mm (35mm equivalent). At 2x magnification, it seems that the image taken by the main camera is cropped to 2x. It seems that it is cropped at 4 times as well, and the outline of the dead grass and the details of the drum can be crushed. When the magnification is switched to 7x, the camera used for shooting seems to switch to a camera with a focal length of 162mm (35mm) equipped with a 1/2 inch CMOS sensor, making the outline of the subject clearer than when it was 4x. Also, the color is reddish overall. When zoomed up to 14x, it looks like this. And the image taken at 28 times the maximum magnification is below. The focus is on the bag, but the resolution is such that the brand logo sewn on the lower right of the bag is barely distinguishable. The 28x zoom seems to be useful in the event of an emergency with 'DJI Mavic 3', but it is recommended to keep it up to about 7x when shooting where detail is required. The zoom magnification of 'DJI Mavic 3' can be switched even while shooting a movie. In the following movie, you can see what it will look like if you switch the magnification while actually shooting the movie.

After selecting the drawney, tap the subject on the screen with your finger and tap 'Start' on the right side of the screen, and 'DJI Mavic 3' will automatically fly around and shoot the movie.

The movie actually shot with 'Drawney' is below. Not only does the drone rise diagonally upwards, but the camera angle is also adjusted automatically. It seems that it takes a lot of practice to do the same shooting manually, but with the automatic shooting function, I was able to shoot an impressive movie with just a few taps on the screen.


◆ 4: Small points I noticed using DJI Mavic 3
At the time of this review, I didn't use it because the amount of light was not so much, but the 'DJI Mavic 3 Fly More Combo' I used this time comes with 4 types of ND filters, so even on days when the sunlight shines, I can do what I want. Shooting is possible. When I actually tried installing the filter, I could easily remove it by twisting it with my finger. 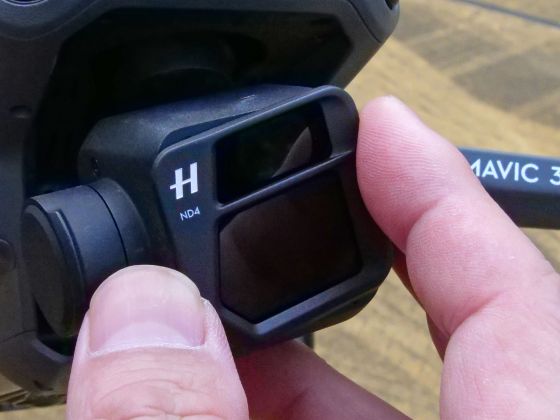 'DJI Mavic 3' can shoot movies up to 5.1K / 50fps, but the file size of the movie is very large because it is too high resolution, and even a movie of about 2 minutes will be a huge file of 2.86GB. 'DJI Mavic 3' is equipped with a 'quick transfer mode' that allows you to transfer files at high speed, but even with the quick transfer mode, it takes about 11 minutes to transfer a 2.86GB file to your smartphone. I did.

On the other hand, when I transferred the file to the PC using the included USB Type-C cable, I was able to transfer the 2.86GB file in about 1 minute. When transferring the data of 'DJI Mavic 3', it is recommended to use a wired connection instead of a wireless connection. 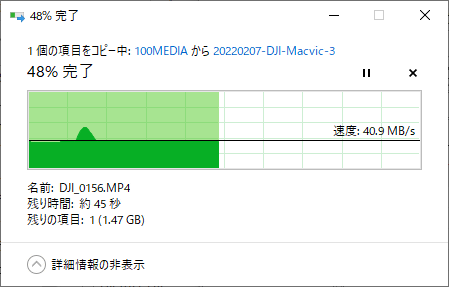 ◆ 5: Summary
As a result of actually flying 'DJI Mavic 3' carefully and shooting a lot of movies, high flight stability, high resolution camera, gimbal that effectively suppresses blurring, long-lasting battery, and drone are required It turned out to be a model that achieved a very high level of performance. Also, the 'DJI Mavic 3 Fly More Combo' comes with an ND filter and a carry bag with outstanding functionality, so if you have this set, you will be able to shoot all the way. 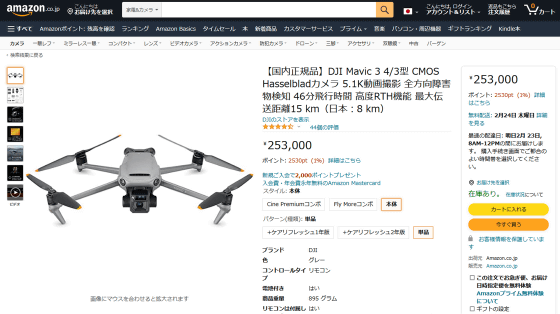