Backblaze, known for HDD failure rate reports, explains 'How many years will HDDs work without breaking?' Backblaze, which is also known for publishing the 'HDD / SSD failure rate report ' every year, says, 'What is the failure rate in the first place?' 'What is the bathtub curve?' ? ”“ How many years can the HDD be used? ”Is explained.

Backblaze is a robust, scalable, yet low-cost cloud backup and storage service that stores 5 billion files and 900 petabytes (900,000 terabytes) on its official page. It is appealing. In order to secure such capacity, Backblaze operates more than 200,000 4TB to 18TB hard drives, and the total capacity has reached 2 exabytes (2000 petabytes = 2 million terabytes). .. Most of these are connected to storage servers that can accommodate 60 hard drives and boot drives, and it is said that these storage servers are collectively managed as 'BackblazeVault' every 20 units. Duplication, storage, deletion, etc. of customer data are performed in this Backblaze Vault.

All hard drives operated by Backblaze are commercially available 3.5-inch HDDs, and the ratio is as follows when classified by manufacturer. HGST is under the umbrella of Western Digital (WDC), but it is treated differently on the pie chart below. What Backblaze is talking about this time is how many years can these hard drives, or HDDs, be used? It is that. Of course, the concept of 'period' such as 'broken in 10 days after operation', 'broken in 1 year', and 'broken in 10 years' is important here, so Backblaze has no element of period, 'failure rate'. We use the word 'Mean Time Between Failures' instead of the word.

According to Backblaze, the average annual failure rate of HDDs is expected to 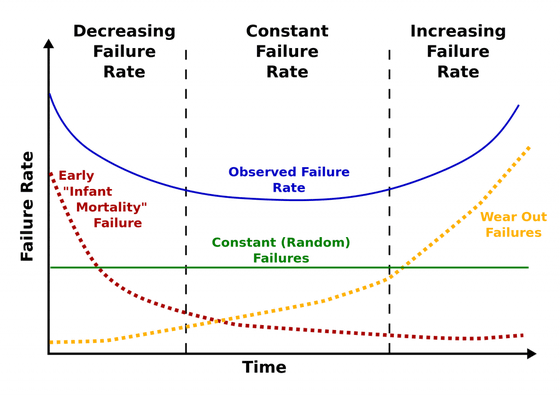 When Backblaze started investigating HDDs, it seems that the annual average failure rate was following the bathtub curve, but in recent years it is said that 'it is less than 2% until three and a half years, but it jumps from there and the left side of the bus dub curve becomes lower'. The results have been obtained. Backblaze describes the shape of this curve as 'rather, it looks like a shallow cassotte or hockey stick.' From the above annual average failure rate, the graph below shows 'How long is the HDD life?'. The HDD that can be used until the 4th year is 90% of the total, but the percentage of HDDs that can survive from there drops sharply, and the survival rate in the 6th year is about 65%. 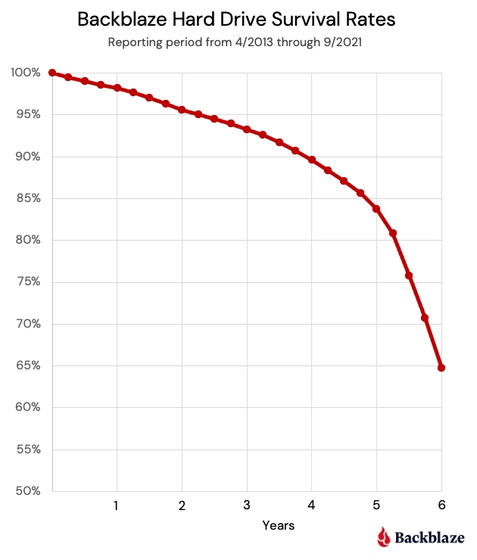 This graph ends in 6 years because 'we didn't collect enough reliable data beyond 6 years', but Backblaze says from the existing graph that 'HDD survival rate is less than 50%'. Will be 6 years and 9 months. ' Based on these results, Backblaze responded to the question, 'How long should I expect to have an HDD to purchase from now on?' It will definitely break, so at least one, preferably two, should follow the '321 Rule' to have a backup. '

You can read Backblaze's 'HDD / SSD Failure Rate Report (3rd Quarter 2021 Edition)' from the following article, which gives you a good idea of which HDD is hard to break.