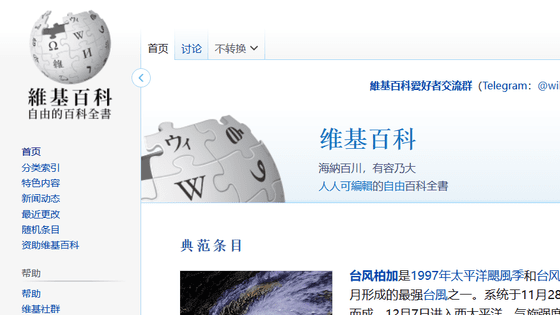 In September 2021, the Wikimedia Foundation, which runs the free Internet encyclopedia 'Wikipedia,' frozen the accounts of seven editors of the Chinese version of Wikipedia all at once. Fast Company, an IT business magazine, reports what was the cause of this incident.

Chinese Wikipedia's fights are the front line in a global war
https://www.fastcompany.com/90692176/chinese-wikipedia

In a statement in September, Maggie Dennis, Wikimedia Foundation's Vice President of Community Resilience and Sustainability, frozen seven accounts with access to the personal information of editorial volunteers and demoted 12 accounts. Announced that it was disposed of. 'This decision is to keep the editors of Chinese Wikipedia safe,' Dennis said, but due to the lack of information, 'there is no evidence that the punished editors were connected to the Chinese government.' It also explains. This time, Techyan, one of the users whose account was frozen in September, interviewed Fast Company. According to Techyan, the user group he belonged to, the Wikipedians of Mainland China (WMC), was simply a group of users who liked to defend the Chinese government. Although it is illegal to access Wikipedia in China, WMC's pro-government stance made it relatively easy to get through the surveillance network and access Wikipedia.

The WMC was a group that defended the Chinese government for personal reasons, but sometimes threatened and harassed other editors to communicate on Wikipedia. In 2018, there was also a violent incident during an offline meeting over implicit rules within the community. According to the Fast Company, these issues appear to have led to the aforementioned mass freeze of editor accounts.

Techyan told Fast Company that he hardly remembers the 2018 meeting and the violence that happened. He argued that the Wikimedia Foundation's disposition was equivalent to discrimination and censorship based on political allegations of adversaries in Hong Kong and Taiwan.

Techyan and his colleagues, who have been banished from Wikipedia, are currently launching their own online encyclopedia, which is a copy of an article from the Chinese version of Wikipedia, which already has 400,000 articles. Since this site complies with the regulations of the Chinese government, it seems that it is a site that can be legally accessed even from within China.