Proteins that turn worker ants into queen ants are identified 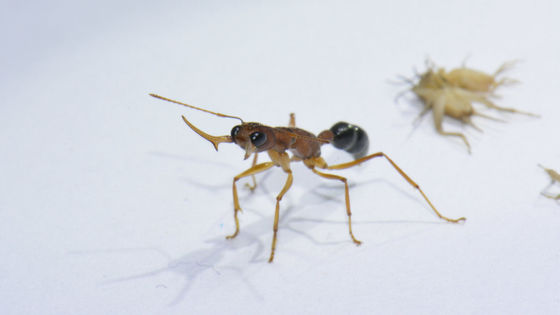 Ants, a type of familiar insect, are social insects in which ants with different roles such as queen ants, worker ants, and soldier ants form a group, and basically only queen ants can lay eggs. I am. Regarding the species called Harpengathos saltator (Indian ant), in which the next generation queen ant is selected from the worker ants when the new queen ant dies, it was announced that 'the protein that determines the queen ant candidate has been identified'.

Scientists Find a Single Protein Can Switch Some Ants From a Worker Into a Queen
https://www.sciencealert.com/the-activation-of-a-single-protein-could-turn-an-ant-from-a-worker-to-a-reproductive-queen

As for ants, which are social insects, there are castes such as queen ants that lay eggs, worker ants that are responsible for raising children and procuring food, and soldier ants that hunt for food and defend nests. It is known that there are many cases where the morphology is different. Among such ants, the Indian ant is exceptionally special, and it has been more than a month since the 'next-generation queen ant selection battle' broke out, in which most of the female worker ants participated when the queen ant died or died. It is a species that undergoes a strange morphological change in which the ovaries of the winning new queen grow and the brain shrinks by about 20%, in addition to the struggle for successors. Research results show that a single protein factor called 'Krüppel homolog 1 (Kr-h1)' has a new effect on the morphological changes that occur in the worker ant 'Gamagade' that has become able to lay eggs like this queen ant. Announced by Janko Gospocic and colleagues at the University of Pennsylvania. Gospocic et al. Have shown that they affect the social behavior of social insects such as ants and honeybees from existing studies, ' Juvenile Hormone III (JH3)' and '20-Hydroxyecdison (20E)' 2 Focus on seed hormones. When these two hormones were injected into the brains of Indian stag beetles, JH3 reduced hunting activity and 20E promoted ovarian activation. There may be some kind of switch-like factor linked to the hormones of India. '

Gospocic and colleagues found that this switch-like factor was 'Kr-h1' through experiments with specific neurons isolated from the brains of Indian stag beetles. According to Gospocic et al., JH3 and 20E affect the gene to which Kr-h1 ultimately binds in neurons, and when Kr-h1 is activated in Indian ant, it is associated with gamagade in worker ants. Genes are suppressed, and in the case of gamagade, genes related to worker ants are suppressed, and when Kr-h1 is removed from nerve cells of Indian ant, gamagade behaves like worker ants, and worker ants are like gamagade. It was confirmed that it behaved in. 'We didn't expect a single protein to suppress a separate gene in the brains of different classes of Indian stag beetles,' Gospocic said in a statement. I thought that the factors that suppress the behavior of ants and the factors that suppress the behavior of worker ants in the brain of stag beetles are completely separate, and I did not think that there was a factor common to both brains. ' comment. In future research, he said he would confirm this discovery and investigate whether Kr-h1 plays the same role in other social insects.