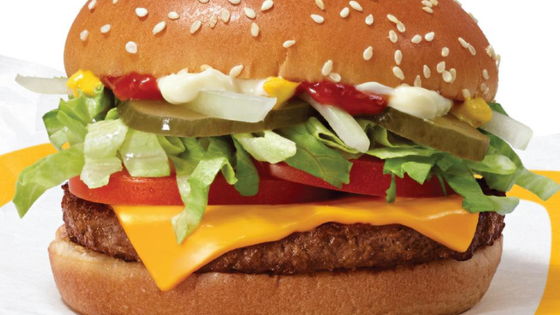 McDonald's has announced that it will begin marketing testing of its plant-based hamburger, McPlant, in multiple parts of the United States. Test sales in the United States follow tests in Sweden, Denmark, the Netherlands, Australia, etc., and are considered to be a step toward actual sales.

McDonald's test-sold a plant-based hamburger called 'PLT Burger' in Ontario, Canada in early 2020. Initially, McDonald's announced that 'There are no plans to revive the PLT burger', but after that, when we test-sold a plant-based hamburger outside Canada, the results were good, so we also test-sold it as 'McPlant' in the United States. It seems that will be held. Plant-based patties are used at McPlant, but the patties manufacturer is expected to be ' Beyond Meat .' Beyond Meat's burgers were especially popular in Canadian test sales.

You can read more about what Beyond Meat's artificial meat looks like in the article below. Especially when you watch the movie, you can see at a glance that it is a perfection that looks like real meat. McDonald's said about McPlant: 'McPlant uses a plant-based McDonald's patty that contains beans, rice and potatoes as raw materials, developed with Beyond Meat. This patties are burgers, tomatoes, lettuce, pickles and onions with sesame seeds. It will be served with Mayonnaise, Ketchup, Mustard and American Cheese and will taste like McDonald's signature hamburger. ' In addition, CNBC, a major American news agency, reports that not only hamburgers using beef-like alternative patties but also products using chicken-like alternative patties may appear on the same line as McPlant.

The sales test is scheduled to be conducted in eight cities in the United States from November 3, 2021.