When does Apple require 'allowing account deletion within the app'? 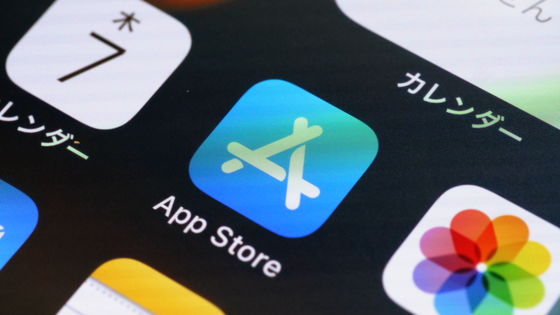 Some iPhone apps require you to create an account to use, but do not specify how to delete the account. Even if users can remove such apps from their devices, they will not be able to break the connection with the operating company, and Apple will require that the developer guidelines 'allow account deletion within the app'. And announced the start time. 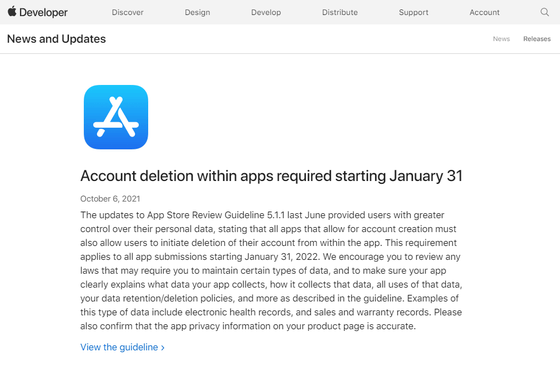 Apple is making it easier to delete accounts attached to third-party apps --The Verge
https://www.theverge.com/2021/10/6/22712795/apple-developer-account-deletion-app-reporting Apple announced an update to the App Store Review guidelines for developers in WWDC 2021 in June 2021, which states that 'users must be able to delete their accounts from within the app.' It was also revealed that was included. On October 6, 2021, Apple announced that this requirement will be valid for all apps submitted after January 31, 2022.

Many apps require you to create an account when using it, but there are many cases where there is no way to delete an account or it is intentionally obfuscated. On the other hand, the act of 'delete the app from the home screen' is easy, so some people delete the app on the surface without breaking the relationship with the company that operates the app. In this regard, Apple's new requirements contribute to improving user privacy.

Apple also announced on the same day that it will display a 'report a problem' button on the App Store product page for iOS 15, iPadOS 15, and macOS Monterey. Previously, app quality issues were only available from Apple Support when users actually purchased fraudulent apps and were harmed. It is believed that the implementation of the Report a Problem button will enable us to respond quickly to fraud and fraud. In addition, the 'report problem' button is said to have been implemented in Australia, Canada, New Zealand, the United States, etc. at the time of article creation. 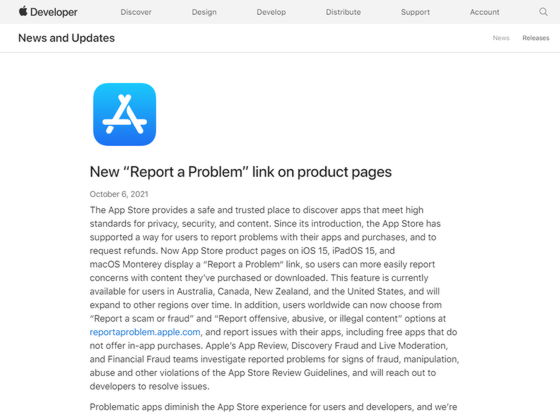