Until the logo of the pure, gorgeous and cyber-flavored manga 'Secret Miyazono' is created

The manga 'Secret Miyazono ', which began when a lonely girl was proposed to a girl who calls herself an android, has a gorgeous atmosphere that depicts the relationship between girls, and a 'SF (science fiction)' stage where machines and space are used in the future. Are mixed. We will send you the making of how the title logo of such a work was finished from the idea to the completion, along with the explanation of the designer. 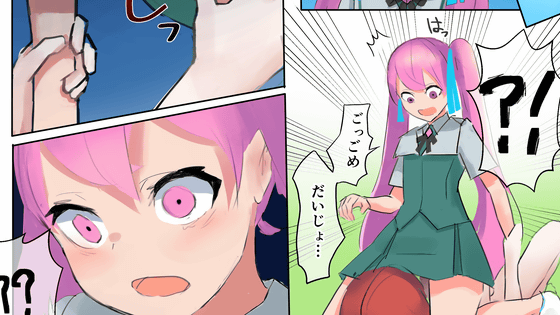 We asked Little by Little, who works on logo design and binding design, for the title logo of 'Secret Miyazono'. Along with the making, aoya from Little by Little has also commented on the commentary.

In devising the title logo, after showing the almost completed manuscript of the first episode and the name plot of the second and subsequent episodes, the image of the original author as 'neat, pretty, simple, slightly cyber' I told them to make a rough.

aoya 'First of all, I'm worried about the silhouette of the design. I will start thinking roughly while looking at the atmosphere of the story and the character design.'

aoya 'I'm creating a rough design of the logo immediately. While adding decorations with illustration creation software, while enlarging and reducing the characters, I get closer to the image when thinking about the silhouette. In Plan A, the Mincho style Based on the calm atmosphere, I imagined the gorgeous atmosphere of the character design. '

aoya 'Even in Plan B, we designed it based on the calm atmosphere of the Ming Dynasty, but on the basis of white and black so as not to spoil the gorgeous atmosphere.'

aoya 'As a variant of Plan C, I tried to combine the atmosphere of the near future with the image of flowers.'

the first episode to compare and examine the three rough plans. I feel that the leftmost plan A melts because the color of the drawing is dark. Plan B in the middle has a white border and is easy to read, but it feels like the atmosphere is floating. On the far right, the letters match, but the border of the flowers in the background is difficult to understand. So, I decided to correct the rough in the form of 'letter of plan C + motif of plan A' with improved visibility and good design.

aoya 'I changed the flower motif of Plan C to the motif used for Plan A, and added a dark shadow that seems to be shining in Plan B, so I corrected the rough.'

aoya 'We will make a completed version based on the rough. We will also make a vertical version at the same time.'

aoya 'Since I didn't adjust the gap between letters in Rough, I also adjusted the width of the gap to match the dot-like letters.'

aoya 'Set the color to white and add letters.'

aoya 'I created the entire shadow. I adjusted the density of each shadow so that the character part, flower, and triangular decorations look just right.'

aoya 'I'm going to add color to the shadows. I've added and erased the colors several times so that the gradation is just right so that the shades aren't biased, and so on.'

aoya 'Add a white texture to prevent the shadows from being buried when placed on the illustration and to make the logo look a little shiny.'

The frontispiece that I actually posted looks like this. The shadow and color effects can be turned on / off according to the illustration on which the logo is placed, making the title logo easy to read, simple, and suitable anywhere.

The triangular motif used in the logo is also used as an effect in the main story.

You can read the main part of the manga 'Secret Miyazono' from the following.