The IPCC finally concludes that 'global warming is caused by humans,' and 'a red light for humankind,' said the UN Secretary-General. The United Nations Environment Program and the Intergovernmental Panel on Climate Change (IPCC) , a climate change assessment agency established by the World Meteorological Organization, released a report for the first time in about eight years, stating that ' global warming is caused by humans ' for the first time. I have decided.

Guterres: The IPCC Report is a code red for humanity
https://unric.org/en/guterres-the-ipcc-report-is-a-code-red-for-humanity/

During the 54th General Assembly and the 4th Working Group Meeting held online from July 26th to August 6th, 2021, the IPCC has been working for about eight years since the 2013 Fifth Assessment Report. We released the first '6th Evaluation Report'. The meeting was attended by more than 300 people from representatives of governments and international organizations such as the World Meteorological Organization, the United Nations Environment Program, and the United Nations Framework Convention on Climate Change. A total of 21 people from the Ministry of Industry, the Japan Meteorological Agency, the Ministry of the Environment, etc. attended.

What is drawing attention in this report is the first assertion by the IPCC that 'global warming is caused by humans.' Since the first evaluation report published in 1990, the IPCC has been increasing its expression year by year about the impact of human activities on global warming. (PDF file) In the fifth evaluation report , '1951' More than half of the observed rises in global mean surface temperature from 2010 to 2010 were very likely caused by human activity, but for the first time, 'human influences on the atmosphere, ocean and the ocean and There is no doubt that it has warmed the land area. '

For the 6th Evaluation Report, you can read the outline of the summary for policy makers prepared by the Government of Japan from the following URL. The proof of this is the change in temperature. The graph below shows the changes in the world average temperature (10-year average), and the observed values have risen sharply since 1850, when the Industrial Revolution occurred. One of the conclusions of this report is that the effects of such warming are global. Extremely high temperatures have been confirmed to increase in almost all parts of the world, including North America, South America, Europe, Africa, Asia, and Australasia. In addition, the confidence of human contribution is high in most areas.

Heavy rains are also increasing without exception in areas where data are available.

Agricultural and ecological drought increased in 12 regions and decreased in only 1 region.

In a socio-economic scenario (SSP) determined by the rate of achievement of greenhouse gas reduction measures, the IPCC stated that 'Global mean temperature will continue to rise in all emission scenarios considered in this report, at least until the middle of this century. Global warming will exceed 1.5 ° C and 2 ° C during the 21st century, unless carbon dioxide and other greenhouse gas emissions are significantly reduced during the year. '

In the worst-case scenario, the Arctic sea ice virtually disappears from around 2050 to September ... The world average sea level is expected to rise 1.0 m compared to 1900. 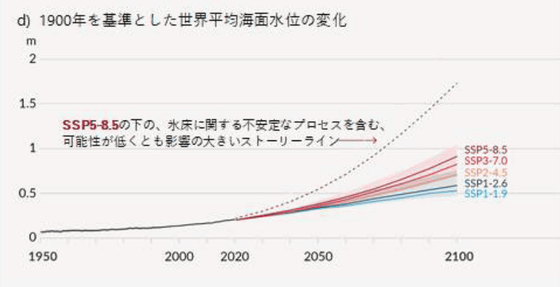 'Climate change is already affecting every region of the globe in many ways. The changes we experience are warming,' said Panmao Zhai, Co-Chair of IPCC Working Group I, who prepared this report. It will increase as the weather progresses, 'he said. Climate change is expected to increase abnormal weather such as heat waves and heavy rains, sea level rise, melting of the permanent frozen soil layer, and ocean acidification. UN Secretary-General Antonio Guterres said it was 'a red light for humankind.'