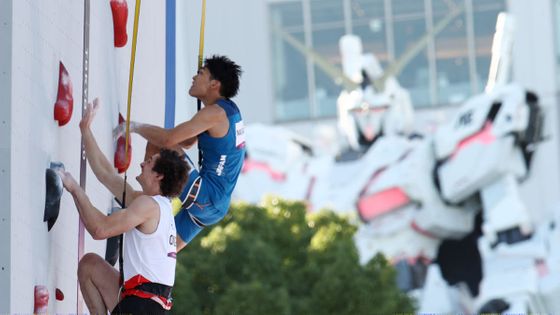 The 'Tokyo 2020 Olympics ', which has been held since July 2021, was held without spectators due to the influence of the new coronavirus, but the state of the competition is being distributed all over the world. Meanwhile, overseas media reports that the BBC, a public broadcaster in the United Kingdom, is struggling to explain 'Gundam ' reflected in the background of the competition.

BBC Commentator Can't Deal With The Massive'Gandum' At The Olympic Games | Know Your Meme
https://news.knowyourmeme.com/news/bbc-commentator-cant-deal-with-the-massive-gandum-at-the-olympic-games

The triathlon men's triathlon held on July 26 was a course around Odaiba Kaihin Park, and the athletes who swam in the sea of Odaiba in the first swim ran in Odaiba, Aomi and Ariake districts on the next bike. At that time, it has become a hot topic in Japan and overseas that the statue of the full-scale Unicorn Gundam, which is a specialty of Odaiba, was reflected in the broadcast.

The video of the triathlon boys is also being broadcast overseas ...

@ pandahank41 was watching the Live Triathlon in the Olympics and caught a glimpse of the Unicorn Gundam statue in Odaiba ... pic.twitter.com/Rt8XN79Luf

It also included the BBC.

Nothing made me squeal with absolute joy than seeing the giant Gundam statue during the #Triathlon at # Tokyo2020 #Olympics pic.twitter.com/cyoDUVTVYX

I tried to explain the BBC's commentary when the Gundam statue was reflected, but '(the players) passed by this huge ...'Gundam'image. This is a kind of famous robot. Well, I don't know anything about this, 'commented. In addition to the fact that Gundam was broadcast, many people are talking about the fact that the commentary called 'Gundam' with a pronunciation like 'Gandum / Gandam / Gandumb'. In addition, a text was handed over to the actual situation later, and he explained that the statue was 'Gandam, a unicorn robot.'

Is Gundam and Noguchi too cool?
Muscle ??????? #Sports Climbing pic.twitter.com/BacD3vcA0a

Tomoa Narasaki got off to a good start with 2nd place at the speed of qualifying ????

On the other hand, when the official Olympic account called Gundam as a 'giant robot in the background,' fans said, 'No ... this is Gundam. It's not a robot.'

In some cases, the BBC official account called 'Transformers' and received a total tsukkomi.

Just when you thought speed climbing was frightening enough, you now need to impress a Transformer too at # Tokyo2020 ! ???????? pic.twitter.com/0GzmVd3CnX

The BBC official account posts a tweet that admits an error 20 minutes after the first tweet. However, in the reply column, he said, 'If Gundam and Transformers fought in the Olympics, which one would win?' In the reply column, 'Transformers are not qualified to participate in the Olympics because there are no humans on board. Gundam Sports that rely on the propulsion of machines like this will not be accepted by the IOC rules, '' Absolutely Transformers, '' Gundam with size advantages, 'and' Patraber wins in between. ' Has been done.

But who would win in an Olympic battle between a Gundam v Transformer? #Bbcolympics pic.twitter.com/VXGszX18VK