decision to make a new movie for 'Digimon Adventure 02 ' and the new TV anime 'Digimon Ghost Game' from the fall of 2021. Information etc. was announced.

This time, a super special video was released at the event.


The teaser visual looks like this. The picture is a boy who is not the main character of 02, Davis Motomiya, and the line 'I am the first person in the world to have a partner relationship with a Digimon' is written. 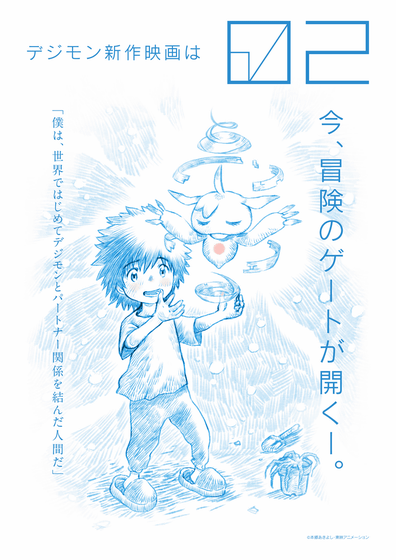 Produced by Tomohisa Taguchi, the director of 'LAST EVOLUTION Kizuna', and Akatsuki Yamatoya, the scriptwriter. The release date is undecided. Comments from producer Yosuke Kinoshita are as follows.

The main axis of this movie is everyone in '02'! Daisuke and his friends have a different charm from Taichi and his friends, and I want to express that because of this age. The characters that can be confirmed now are not Daisuke and others, but unknown boys and Digimon, and lines of concern ... The illustration was drawn by Kenji Watanabe, one of the creators of Digimon! What does that mean? To be honest, I have just started, so it's a long way to go, but please look forward to it!

In addition, information on the new TV anime 'Digimon Ghost Game' that will be broadcast from the fall of 2021 has also been released. Information on the three Digimon is also available. This is 'Gammamon'. 'Jerry Mon'. It is still unclear how each will interact with the children and the story.