When trying to achieve some purpose such as spreadsheets and illustrations as well as text editing, 'which tool to choose' becomes a problem. Robin Clean summarizes the data about how Visual Studio Code is immobilizing its position in the world of text editors.

One way of thinking about choosing a tool is to 'choose the tool with the longest life.' No matter how familiar you are, once you've finished developing, you'll have to relearn how to use new tools from the beginning, and to avoid that pain, choose a popular and long-standing tool. By the way. Looking at the fields of spreadsheets and illustration, both Microsoft Excel and Adobe Illustrator have been popular for a long time since they were released in 1987.

On the other hand, in the field of text editing, the oldest ones are not always popular. For example , Sublime Text, the most popular text editor on Mac from 2015 to 2017 in a Stack Overflow survey , was released in 2008, which is quite new, and there are various text editors such as TextMate and Atom in addition to Sublime Text. When it first appeared, it became popular. However, Mr. Clean analyzes that the era when such text editors were divided into groups is ending with the advent of Visual Studio Code.

If you look at the Stack Overflow findings below, you can see that Visual Studio Code is growing rapidly in popularity. Not only is it growing in popularity year by year, but it has jumped over the 40% line, which was not possible with other text editors, and has reached 50%, making it one step ahead. 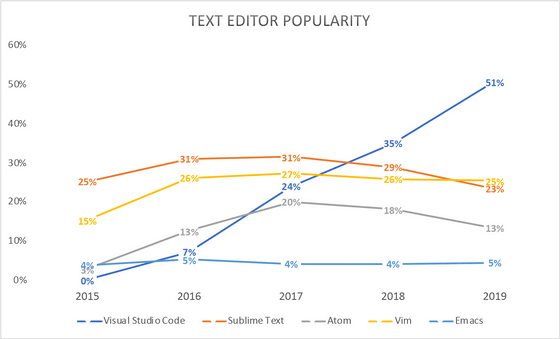 Clean also states that Visual Studio Code is the final point in the evolution of text editors. Early text editors such as Emacs and Vi were released in 1976, before current user interface conventions were established, so they use their own methods to take advantage of features such as copy, paste, and undo. There are high hurdles to start using it. Later, TextMate was released in 2004, bringing many features such as abbreviation snippets, auto-filling of paired characters, fuzzy filename search, and extensions. In 2008, Sublime Text appeared, realizing features such as mini-maps, multiple cursors, and cross-platform. In terms of extensions, more advanced extensions have become possible, and package management has also become possible.

Released on GitHub in 2014, Atom has a built-in package manager from the beginning, allowing you to use extensions like an app store, such as displaying a Readme with inline images, and extensions. The barriers to entry were fairly low, as features could be created in the very well-known languages HTML, CSS, and JavaScript. Unfortunately, Atom had performance issues that prevented him from becoming a champion. 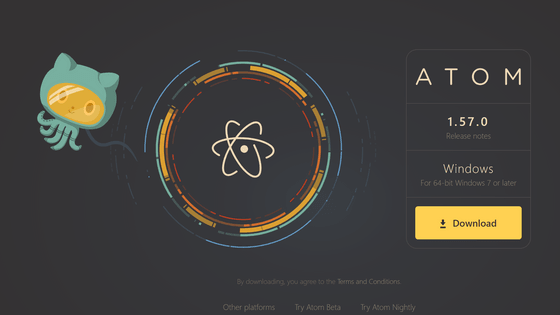 And in 2015 Microsoft released Visual Studio Code. Visual Studio Code uses Electron released by GitHub at the same time as Atom, and like Atom, it is possible to create extensions with HTML, CSS, JavaScript, and full access to Node.js from extensions is possible. So everything you can do with a normal application can now be done with extensions. Extensions that have evolved since TextMate have almost reached completion in Visual Studio Code, and Clean says that there is no further leap forward and there is no possibility of being replaced by a new text editor. ..

In addition, Visual Studio Code has been ported to work as a web app, not just the desktop version. According to Mr. Clean, such a transplant requires a lot of effort, and conversely, it proves that it is worth the transplant. For example, Emacs and Vim were ported from terminal apps to GUI versions, and Photoshop and Excel were ported to mobile apps because it was so valuable.

Finally, Mr. Clean says that Visual Studio Code is open source and is also popular because of its active development. Since TextMate and Sublime Text were personally developed apps, users were often dissatisfied with the release schedule. Below is the commit graph of Visual Studio Code, but you can see that the development is ongoing. 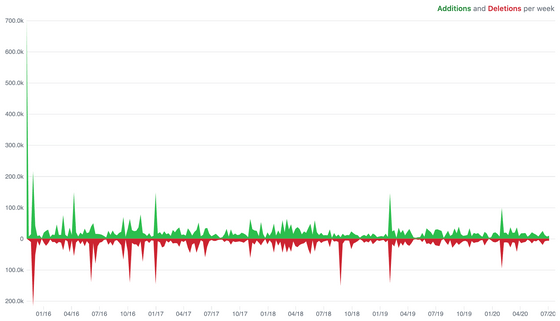 Although the trend of text editors has changed every few years since the introduction of TextMate in 2004, Visual Studio Code is becoming more popular as mentioned above, and it is thought that it will remain the champion for a long time to come. Based on this evidence, Mr. Clean concludes that the cost of learning Visual Studio Code is now fully rewarding in his career.