rainbow disaster ' falling block puzzle game that was to piece the screwdriver that belong to is the 'in Jipuyo'. In this game, which has a simple rule of 'connecting rivers and forming a unit that was actually unveiled in collaboration distribution, it disappears' but is extremely difficult, a movie that recorded an incredibly high score by deciding a 1062 chain , The YouTube channel Nijisanji Data Department , which summarizes various data related to Nijisanji in a movie, is open to the public.


You can understand what kind of game Niji Puyo is by reading the following article.

Nijisanji Liver I tried to play 'Nijipuyo', a super-difficult game that refuses to see for the first time, forming a unit of more than 100 people --GIGAZINE The version of Nijipuyo is 5.1.0, and I'm playing in 'Ars Almal Mode', which narrows down the number of rivers that appear to 50, centered on Ars Almal. Since the movie is played faster, the faces of the rivers pile up at a tremendous speed. 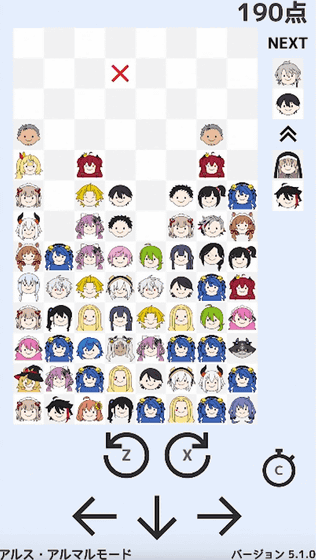 Then, when you put the pieces of Nijipuyo is a mechanism in which the points increase as the number of units and the number of chains increase. The key here is the collaboration event ' Battle of Revagacha Bakugahara! [Super Bomberman R Online] ' held in June 2021 where a total of 32 rivers were divided into two groups and ' Super Bomberman R Online'. when you play against ', ShaTsuki 16 people unit that led's' Rebagacha爆KeHara of battle-Higashigun '. Units do not disappear each time, but the combinations at the time of establishment are counted in a chain. Since many rivers belonging to 'Battle of Revagacha Bakugahara / East Army' are adjacent to each other, the number of chains will increase at explosive speed. Finally reached the 1061 chain. The

combinatorial explosion is directly linked to the score, and the number of digits increases so much that the line breaks in four rows. In the 1062 chain, the collaboration unit 'Ebi Chili' between Mr.

Aix Albio and Mr. Akina Saegusa was established, and the chain ended. is 40,000 times more than the fourth power of Edington 's number, which indicates the number of protons in the observable universe, which is a huge number that completely transcends human perception.