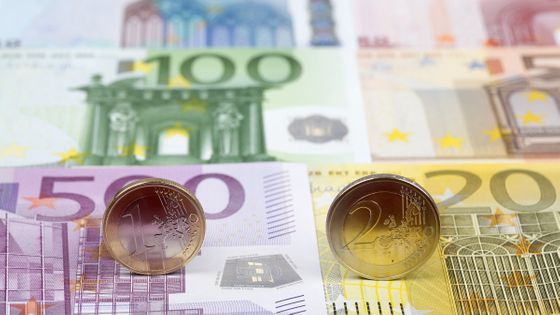 European Central Bank, which is responsible for the monetary policy of 19 euro area countries, announced that it would start a full-scale research phase toward the introduction of its own digital currency, the 'digital euro.' As many people move from cash payments to digital payments due to the pandemic of Coronavirus Disease (COVID-19), the digital euro is expected to play a role in cash storage, and a preliminary study has already been conducted. And experiments are also being conducted. 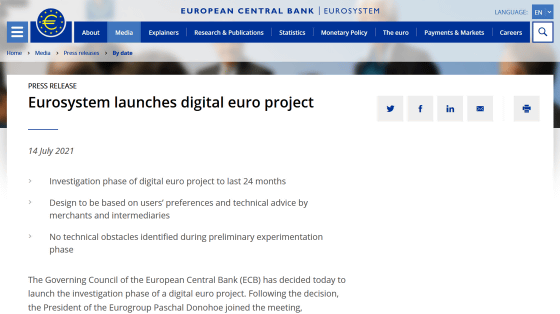 The ECB starts work on creating a digital version of the euro
https://www.cnbc.com/2021/07/14/the-ecb-starts-work-on-creating-a-digital-version-of-the-euro-.html

On July 14, the European Central Bank's board of directors decided to begin the research phase of its own digital currency, the Digital Euro Project. This was participating in the conference, association and by the euro-zone countries finance ministers Eurogroup chair of Pascal Donoho Mr. also show their support, that of the expressed full support to the project.

The idea of the digital euro has been around for a long time, and the European Central Bank published a (PDF file) report on the digital euro in October 2020. 'It's been nine months since we published our report on the digital euro, and during that time we conducted further analysis and sought feedback from citizens and experts,' said Christine Lagarde , President of the European Central Bank. We did some experiments and got promising results. All of these factors made us decide to move up the gear and start the Digital Euro project. '

The announced research phase will continue for 24 months, focusing on functional design based on user needs, prototype design etc. will be done. It also assesses the potential impact of the digital euro on the market and identifies options for avoiding risks to the overall economic system. 'We work with the European Parliament and other European decision makers to regularly report on our findings. Citizens and merchants,' said Pabio Panetta, chair of the High-Level Task Force on the Digital Euro. , The payment industry will also be involved. ' 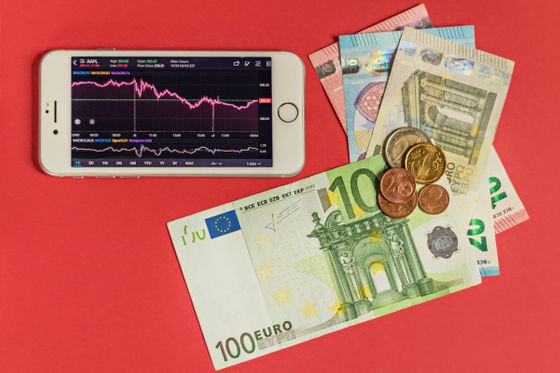 commodities and money, digital money is emerging in response to changes in society and technology. Commented. The convenience and efficiency of digital and online payments has long been a major benefit, but with the COVID-19 pandemic, many people are shifting their payment methods to digital, and the role of cash as a payment method is declining. I point out.

Sovereigns have a history of providing currency to citizens as a symbol of stability, security and trust for centuries, and the European Central Bank follows its mission, so the transition to digital cannot be ignored. Panetta insists. Therefore, the European Central Bank has decided to invest the resources necessary for product design in preparation for the possibility of issuing a digital euro.

Panetta believes that while people in the euro area already have access to cash, a safe and widely accepted payment method, this should also apply to digital and online payments. 'Digital Euro reduces transaction costs. It facilitates financial inclusion by making digital payments available to those who currently do not have access to financial services. This allows users to work with all stores in the euro area. You will be able to purchase goods and services in your country. '

Unlike many crypto assets, the digital euro is issued and managed by the European Central Bank, like the euro, so it is less exposed to liquidity, credit and market risks. In addition, the European Central Bank is not interested in monetizing user data and says that the risk of commercial use of data and unjustified privacy breaches is low. Meanwhile, to prevent illegal activities such as money laundering and funding criminal gangs, we plan to create a mechanism that allows only legitimate authorities to access user data in an appropriate and transparent manner that complies with European regulations. .. In the nine months since the European Central Bank and the central banks of the euro area released their report in October 2020, 'Digital Euro Ledger', 'Privacy and Prohibition of Money Laundering' and 'Digital Euro Circulation' He said that he conducted experiments in four areas: 'restrictions' and 'promotion of end-user access when offline and comprehensiveness with appropriate devices'. As a result, there were no major technical obstacles to the design of the digital euro.

According to the statement, it was confirmed that by scaling up the existing infrastructure 'TARGET Instant Payment Settlement (TIPS) ' that supports 24-hour fund transfer, it is possible to process more than 40,000 transactions per second. is. In addition, the power required for the digital euro payment infrastructure was negligibly small compared to the energy consumption of crypto assets such as Bitcoin.

'Our goal is to prepare for the development of the digital euro, which could take about three years by the end of the two-year research face,' Panetta said in a blog.