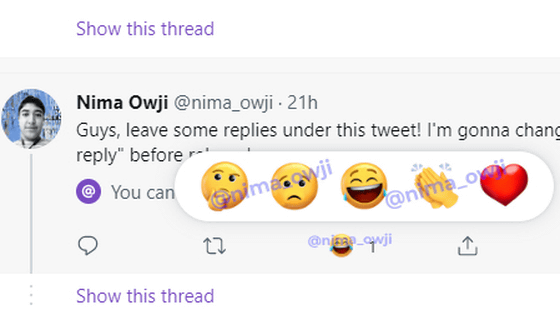 At the time of writing an article, there are only three ways to respond to tweets posted by users on Twitter: 'Reply', 'Like', and 'Retweet'. However, it is clear that Twitter is planning to send reactions such as hearts and applause to tweets so that users can respond to tweets more easily.

The first report that Twitter is working on the development of reaction function is the application development that has revealed details about new functions such as Twitter's 'super follow ', ' cancel transmission ', and ' Twitter Blue' from application analysis. This is Jane Manchun Wong .

Mr. Wong tweeted on May 13, 2021 that he is working on developing a function that allows Twitter to send reactions such as 'like', 'cheers', 'hmm', 'sad', and 'laughs' to tweets. After that, on May 29th, I explained with images what kind of reaction will be sent.

The icons for the Cheer and Sad reactions are WIP and shown as the generic heart one at the moment https://t.co/ZCBhH8z7JR pic.twitter.com/dGqq1CzIis

. @Twitter reactions feature is almost complete! Let's have a look at the final emojis!

In addition, Owji also said that a new Fleet circle and space icon will be added to the user icon part of the web version of Twitter.

Is Working On Twitter #Fleet Rings, And AttoTwitterSpaces Rings For Twitter Web App! Let'S Have A Look! ???? Pic.Twitter.Com/1xwnTMS5l3

Both Wong and Owji are collecting information about new features that will be implemented in the app by reverse engineering Twitter, so it's almost certain that Twitter is planning these features. However, it is unclear when the reaction feature will actually be implemented.