A search engine 'Neeva' with zero ads by a former Google executive started, adopting an unusual subscription method as a search engine 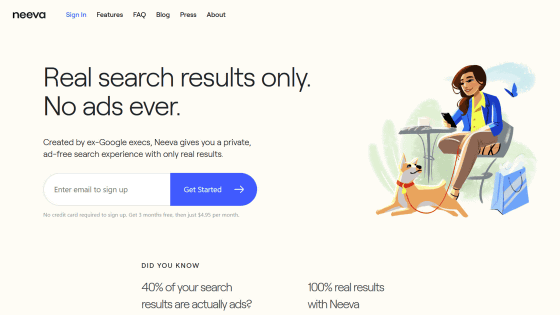 zero-advertising search engine Neeva, which is being developed to replace Google search, is finally available. Neeva is a startup launched by Schridal Ramaswami, who has a background in advertising at Google, and uses an unusual subscription method for search engines.

???????? Today, we're thrilled to announce that Neeva, the world's first ad-free, private, and customizable search engine, is now publicly available to everyone in the United States! #SearchReimagined #TryNeeva

Neeva is an ad-free search alternative from ex-Googlers
https://www.fastcompany.com/90650719/neeva-search-engine-google-alternative-privacy-sridhar-ramaswamy-tech

Developed as an ad-free search engine, Neeva announced on its official blog on June 29, 'Today, we are pleased to announce the availability of an ad-free private subscription search engine in the United States. Sign up. It's free for three months, and then it's only $ 4.95 a month. ' Neeva offers extensions compatible with all major browsers such as Chrome, Safari, Firefox, Edge, Brave, and also offersiOS apps.

'Neeva should focus on consumers, not advertisers,' said Ramasuwami, co-founder and CEO of Neeva. Search results are based on ad sales and behavior. Finding the best answers to consumer questions should always be a priority, not tracking. Today's subscription-based model announcement is a viable search alternative built on trust and transparency. It's the first step in providing a means. '

The main features of Neeva are as follows. ・ Safe and private browsing
By installing the Neeva extension in your browser, you can block trackers that track user behavior on the Internet. Of course, Neeva will not sell or share user data with other companies either. 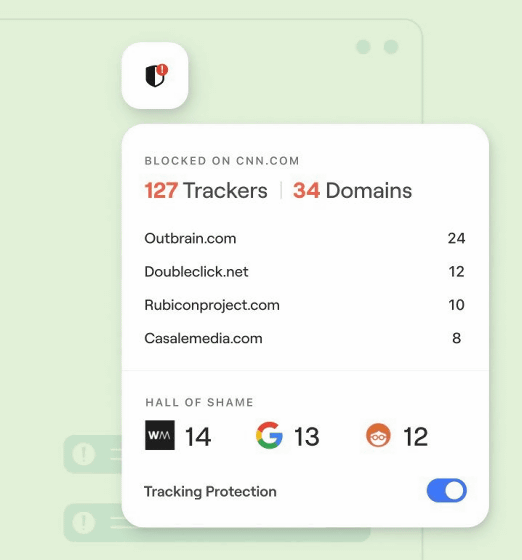 ・ Customization function of search results
Like other search engines, Neeva displays results according to the user's search word, but the feature is that the widget at the top of the search screen can be freely customized. In addition to being able to display local weather and stock prices, it is also possible to set 'favorite news sites'. · Integration of email, calendars, documents, etc.
To make searching even more convenient, Neeva can integrate accounts such as 'email', 'calendar', 'documents' and 'chat tools' and search for documents stored in these accounts from the search bar. .. This allows users to save time searching. 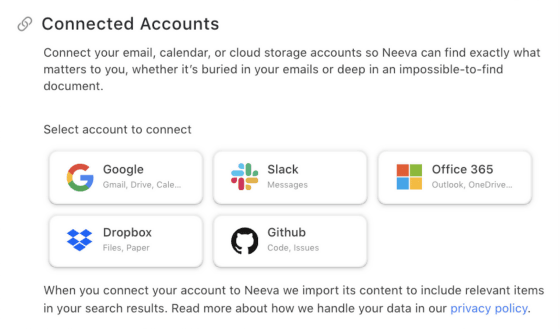 ・ Support content creators with search queries
Neeva, like Google and others, may display text snippets extracted from websites for search words on the search screen. In this case, Neeva will distribute 20% of its sales to the creators of the content with which it has a partnership. Neeva has already partnered with Quora, a Q & A forum, and Medium, a blogging service. 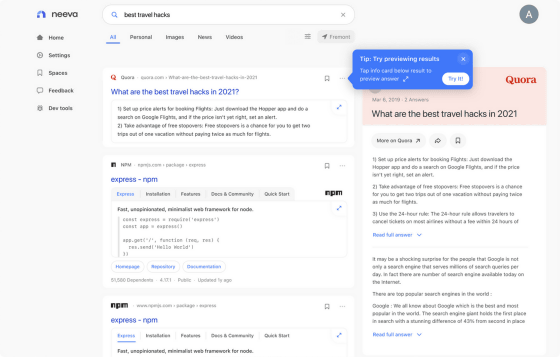 When Ramasuwami, the founder of Neeva, joined Google in 2003, the effectiveness of displaying ads next to the search results screen was recognized, but most people have more ads than ever before. He did not expect it to become a business. Since then, Google's advertising department has grown exponentially, but gradually Lamaswami has become dissatisfied with the way targeted ads are displayed on the web. Mr. Lamaswami thought that 'separating user data' is very important in search engines, but contrary to Mr. Lamaswami's idea, Google actively uses user data for advertisement display, The content of Google search now also affects the ads displayed on YouTube.

And although Lamaswami, who left Google in 2018, restarted as a venture investor, he eventually joined YouTube's former vice president of monetization, Vibeck Lagunasan, a new search engine that does not display ads, Neeva. Was launched. It seems that many former Google employees have joined Neeva in addition to the two, and at the time of writing the article, about 30% of the 60 employees are former Google employees.

The mechanism of 'subscribing to search engines' seems strange, but the business media Fast Company said, 'On the Internet,' as a result of the generalization of payments to paid members such as Spotify, Netflix, and the New York Times. No one is willing to pay, 'he said. 'Consumers are increasingly willing to pay for life-related and personalized experiences,' said Margo Georgiadis, director of Neeva. I've done it. '

At the time of writing the article, Neeva can only be used by users living in the United States, and the timing of deployment in Japan is undecided.