From June 15, 2021, at Ootoya, a set meal chain, a summer-only menu using 'ume' ' Grated plum and chilled shirasu salad udon ' ' Chicken cutlet and grated soup stock with plum shiso ' ' Cold pork and colorful vegetables' 'Shabu and Udon Jako Rice ' is now available. Focusing on the traditional food 'Umeboshi', which is said to be a natural superfood, it is said that it is a menu where you can spend the summer well, so I actually tried it to get rid of the heat of midsummer. A summer-only menu table with a copy of 'Food regimen starting from plums'. I ordered all 3 types. The first thing that was brought in was grated plum and chilled shirasu salad udon (single item, 800 yen including tax). Fried eggplant, lettuce, chopped Japanese ginger, shirasu, and sliced tomatoes are topped on the udon noodles. On top of that, grated radish and plum sauce are hung. I came with bonito flakes and mentsuyu. Place the dried bonito on top of the udon noodles and sprinkle with olive oil from above. When I try to eat it, the crispy texture of lettuce and Japanese ginger is a nice accent in the smooth cold udon noodles. Along with the refreshing sweetness of grated radish and the aroma of olive oil, the refreshing acidity and aroma of plum meat spreads in your mouth. And, among all the cold things, there is a relieved fried eggplant that has just been fried and is still warm. It's full of vegetables, so it's quite satisfying to eat. The next item that was brought in was 'Plum shiso-wrapped chicken cutlet and grated soup stock' (single item, 780 yen including tax). The cutlet is pre-cut into bite-sized pieces. Looking at the cross section, the perilla leaves are wrapped around the chicken and fried crisply. It's chicken cutlet, but it comes with a dashi stock like tentsuyu instead of sauce. Contains grated radish and plum meat. Let the cutlet go through the dashi stock and eat it. The chicken katsu is juicy, but thanks to the grated radish, it can be eaten refreshingly. The aroma and sourness of the perilla and plum meat wrapped around the chicken also produce a refreshing taste and stimulate the appetite. Since the cutlet is bite-sized, it is easy to eat, so I ate it crispy. 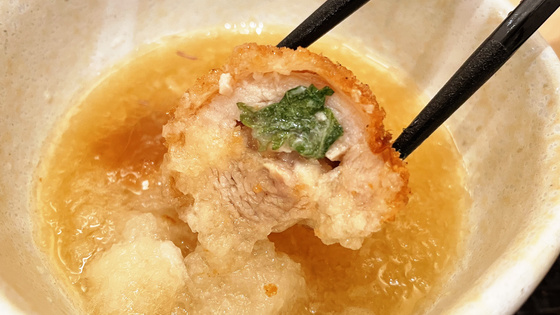 In addition, a large amount of shredded cabbage was piled up under the cold pork shabu-shabu. Umejako rice is topped with chirimenjako on rice cooked with plum meat and hijiki seaweed. There are also chopped perilla leaves. Sprinkle the special black vinegar ponzu soup with the attached plums over the cold shabu-shabu ... I will eat it. Cold shabu-shabu is also greasy and has a firm texture, but when eaten with shredded cabbage and summer vegetables, the aftertaste is refreshing. When eaten with vegetables, it is quite voluminous. The plum jako rice was simply seasoned, and the acidity of the plum meat, the aroma of the perilla leaves, and the texture and umami of the hijiki and chirimen jako were firmly felt.