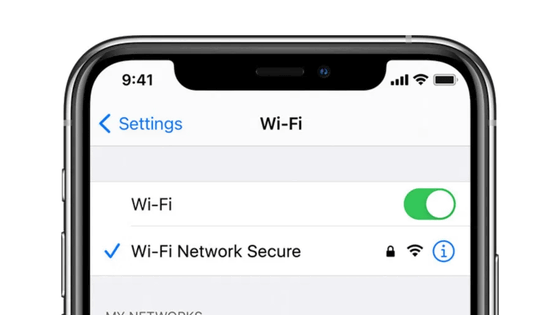 A bug has been discovered in which the iPhone's Wi-Fi functionality completely fails when connected to a Wi-Fi network with a specific SSID.

A specific network name can completely disable Wi-Fi on your iPhone --9to5Mac
https://9to5mac.com/2021/06/19/a-specific-network-name-can-completely-disable-wi-fi-on-your-iphone/

Security researcher Carl Schou found a bug that caused the iPhone's Wi-Fi feature to stop working altogether . Schou reports on his Twitter account that connecting to a network with an SSID of '% p% s% s% s% s% n' will disable all Wi-Fi related features on the iPhone. ..

After joining my personal WiFi with the SSID “% p% s% s% s% s% n”, my iPhone permanently disabled it's WiFi functionality. Neither rebooting nor changing SSID fixes it :~) pic.twitter.com/2eue90JFu3

Schou doesn't explain in detail why connecting to the '% p% s% s% s% s% n' SSID disables the iPhone's Wi-Fi feature. However, 9to5Mac says, 'The syntax'% (alphabet)'is commonly used in programming languages to format variables into output strings, and in C the number of characters written in the format string is a string. It means converting to a variable that is passed to the format function, so it is possible that the Wi-Fi system has passed the unsanitized SSID to an internal library that is performing string formatting. It seems that this will cause arbitrary memory writes and buffer overflows, corrupting the memory, killing the process in iOS, and effectively disabling Wi-Fi. '

Therefore, until Apple fixes this bug, 9to5Mac recommends that if you find an SSID that contains '%' in free Wi-Fi etc., you should not connect to it.