of the original animation 'Sonny Boy ' that started in July 2021 has been released.


In addition, the key visuals are also open to the public. The visual depicts the main characters, Nagara, who have drifted to another dimension, standing in a corner of the rooftop. 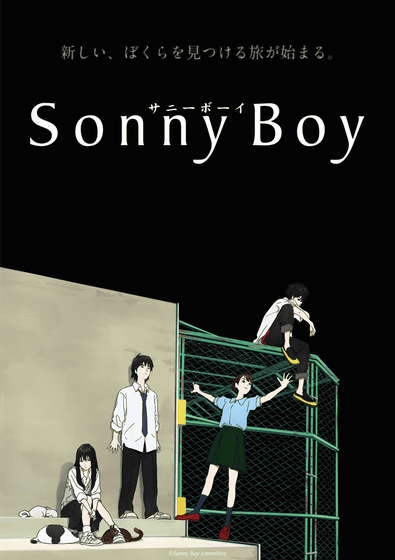 The fastest online screening of episode 1 is scheduled for this weekend, Saturday, June 19th.

The world's smallest motor made of 16 atoms will be developed, as a clue to the mystery of quantum physics --GIGAZINE

How are images and phrases that are popular on the Internet born and spread? --GIGAZINE

What is the painting 'Dog Playing Poker' that has been loved by Americans for over a century? --GIGAZINE

What is the 'how children can help with household chores' learned from the indigenous peoples of Guatemala? --GIGAZINE

◆ Neta (memo, etc.)
A large rock that appeared during construction 'Because it is interesting' Locals enshrined with shimenawa

My uncle has no human rights, so I can only use it as food pic.twitter.com/V26poOTHp7

◆ Society / Politics / Economy (Case / World News / Business)
Voices of doubt about vaccination and billing at the hospital Why is the re-examination fee billed even though it should be free? ｜ Medical / Corona ｜ Local News ｜ Kyoto Shimbun

Oripara app, Abenomask ... Check by the Board of Audit, see off against the ruling party: Tokyo Shimbun TOKYO Web

When I saw the blog of a charismatic housewife who said that she had a husband and two boys who were eating well and saved 10 million in 9 years by keeping the monthly food expenses down to 30,000, the elementary school child was still diagnosed with obesity and hyperlipidemia. I wonder ... Saving food is not justice.

UZI pic.twitter.com/ch2ldd105Y for young lady only

Note that the vending machine in the dormitory of Kyoto University, Kumano Dormitory is 'illegal installed' → There is also a situation that 'autonomous dormitory' while the voice of 'Kyoto University student' is ... --Togetter

'I want to eat forever ...' The 'Summer Marugame Udon Bento' made by Marugame Seimen is too delicious --Togetter

Talks between President Biden and King Philip of Belgium Anti-drone team in security. The person on the left has a SkyWall 100 that emits nets, and the person on the right has a Drone Shield that interferes with radio waves. It looks like a science fiction movie ... pic.twitter.com/rH5eBWrBfs

I investigated the development process of COCOA --Qiita

I didn't have an older brother for half a year ... pic.twitter.com/CX2onkXHp0

How to identify pigeons pic.twitter.com/kp8NSklWzc

I didn't bring it. I bought it as I said earlier. I wonder if I can guess that I bought it is not the real thing. Mr. Dekisugi is quite knowledgeable, but he has a tendency to listen to and interpret people's stories in fragments. A model-like 'memorization idiot' with neither reading comprehension nor demonstrative ability pic.twitter.com/zqLFyHbKFc

Even though it's the first scene I read, I can see a completely different line pic.twitter.com/CO8rYlEhCx

A story about a former dog reborn as a person looking for an old master (1/7) pic.twitter.com/K4z94LkeYQ

It is a Pac-Man manga that comes to the forefront of Ichihachi. pic.twitter.com/pvCQHdZPEV

31st Kaeru-san, where are you #picture romancer #100 holo pictures pic.twitter.com/kZucjL2HF2

A father who wants to make his son a soccer player pic.twitter.com/CCPc1Ao4Uk

Snack Basue that covers all the troublesome people who have a family word about pixel art Let's read everyone pic.twitter.com/rnughzVqqs

Yukari who pretends to be an android to serve the master Concept pic.twitter.com/RZNs1HVQKE

I also tried a new way of drawing pic.twitter.com/zSzzabWDSp

Congratulations on the release of Alchemy Stars, and I participated in the design and illustration as a special art director! pic.twitter.com/AuONZUzgtu

It's a memory of my high school days. Probably the first prize in the world to do this pic.twitter.com/IPYvNUVOEY

I drew a cartoon where a robot drives a roadster

The flash of Hathaway's gig. Gigi's expression was very cute!

Did you feel a little young? pic.twitter.com/h8sSFGbzKL

◆ Sports / Entertainment / Music / Movies (Entertainment)
'Isn't our life worth it!' Copa America, which was held forcibly, 9% of registered players were in a corona-positive abnormal situation on the 3rd day of the opening 'It is no longer a soccer tournament' [Local] | Soccer Digest Web