What the hell is going on in 'Research to Understand Whale Words'? 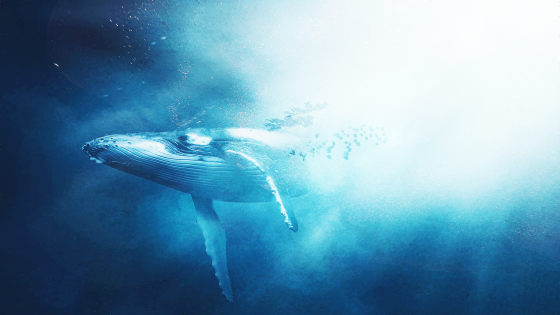 Sperm whales have a brain six times as large as humans, have a complex social structure, and spend a lot of time communicating and social activities using click sounds called 'coders.' It is said that the coder lasts 10 seconds at the shortest and 30 minutes or more at the longest, but what kind of interaction the whales are interacting with through the click sound is still a mystery. So in

a project called the Cetacean Translation Initiative (CETI), scientists are trying to 'decipher the coder.'

Will humans ever learn to speak whale? | Live Science
https://www.livescience.com/can-humans-understand-whales.html

Whales were found to be making sounds in the 1950s, and communication was found through the sounds in the 1970s, and knowledge of codas was only recently gained. .. Whales can dive to a depth of 1200 meters in the sea , and echolocation ability to know the distance, direction, size, etc. of an object using ultrasonic waves has been developed so that it can search for food even in a pitch-black deep sea environment. It is believed that it was done. According to a paper published by CETI, the same mechanism as this echolocation is also used in the coder.

'Analyzing the voice of a whale' has long been considered extremely difficult. However, in recent years, various technologies such as AI have undergone rapid evolution, and when these technologies enable deeper research than ever before, oceanographer and CETI leader David Gruber said. thinking about. For example, 'GPT-3 ' created by the AI research organization OpenAI became a hot topic because it can create ultra-high-precision sentences like humans using deep learning. CETI's research team believes that even humans may be able to create whale words by using similar methods.

However, the challenge here is that deep learning requires a huge amount of data to use it. CETI has recorded about 100,000 sperm whale clicks as of 2021, but it is said that nearly 4 billion data are required to use machine learning algorithms. For this reason, CETI collects data using a drone that can place a microphone as soon as it finds a whale, and a robot fish that tracks whales and picks up voice, in addition to installing a microphone in the sea.

The research team also points out that even with the increased amount of data, existing machine learning algorithms may not be able to perform correct analysis. Voice analysis is more difficult than sentence analysis. For example, one word 'umbrella' is easy to recognize if it is a sentence, but if it is voice, 'Ambiguity' is one word. It is ambiguous whether it is one word in 'umbrella'. In addition, humans have similar language patterns in different countries, but whales differ greatly not only in language but also in behavior.

However, the research team believes that CETI will be a very valuable project because of the many challenges. By learning the behavior of animals and understanding non-human communication, there is a possibility that the technology to be developed in the future will be further developed.