The United States is home to world-renowned ultra-rich people, including Tesla CEO Elon Musk and Amazon founder Jeff Bezos. It is believed that these ultra-rich people also pay a huge amount of income tax to the U.S. government, but surprisingly Mr. Musk did not pay $ 1 (about 110 yen) in income tax in 2018, and Mr. Bezos also 2007 Achieved zero income tax in 2011 and 2011. ProPublica, a non-profit and independent news agency, summarizes the mystery 'How are the ultra-rich Americans legally avoiding income tax payments?' According to ProPublica, the ultra-rich people who have achieved zero income tax in the last few years include Michael Bloomberg, the founder of information service company Bloomberg, Carl Icahn, the founder of the holding company Icahn Enterprise, and genius investors. Includes George Soros , known as. ProPublica analyzed how some of the wealthiest people in the United States avoided income tax, based on data obtained from the Internal Revenue Service (IRS) of the United States and World's Billionaire ranking data released by Forbes.

According to the survey, the total wealth of the 25 wealthiest people in the United States increased by $ 401 billion between 2014 and 2018, and the total income tax paid by these people was $ 13.6 billion (about 43,870 billion yen). It turned out to be about 1.49 trillion yen). This income tax amount may be staggering, but in proportion it is only 3.4% of the increased wealth. This is a very small amount, considering that the maximum tax rate for US income tax at the time of writing is 37%.

On the other hand, a typical wage worker in his early 40s living in the United States increased his household's net worth after tax by an average of $ 65,000 over the same period. However, since most of the income earned by wage workers is salary income, an income tax of about 14% will be levied, and the total income tax paid during the same period is about 62,000 dollars (about 6.78 million yen). It will be. In other words, ProPublica points out that the average American pays about the same amount of income tax as the increase in wealth, even though the ultra-rich people pay only a very small percentage of the income tax on the increase in wealth. I am. 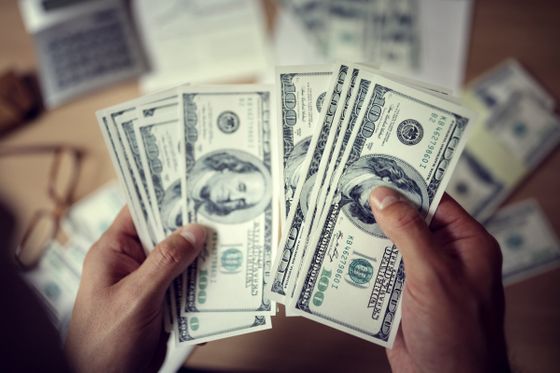 Because the U.S. government taxes income, many common households pay income tax in the 10% range from their total salary income and use the remaining money for living expenses, entertainment expenses, and savings or stock investment to form assets. To do. On the other hand, for the ultra-rich, income tax is levied on compensation as CEO and profits obtained by selling stocks, but income tax is not levied even if the value of the stocks owned increases. ProPublica states that assets will increase by the amount of the increase.

However, no matter how wealthy people are increasing their wealth due to rising stock prices, they cannot live a wealthy life without actually getting cash. ProPublica points out that 'debt' is one way for ultra-rich people to get cash while evading income tax. For the general public, debt is an image of a loan to buy a car or a house, or something to do when life is difficult. However, for the ultra-rich people, debt is a tax-free way to get money, and it seems that it is possible to easily get a huge amount of cash by using the huge amount of stocks held as collateral.

The IRS cannot consider the debt of the ultra-rich people as income because the debts need to be repaid in the end, and the ultra-rich people get billions of yen tax-free by using stocks as collateral. You can put it in. The interest on the loan to the ultra-rich is only a few percent, and considering that if you get the same amount of income income, you will be subject to the maximum tax rate of 37% income tax, the one who borrows overwhelmingly pays The amount will be less. ProPublica explained how ultra-rich people can escape income tax payments and slammed criticisms of how to widen the gap with the general public, but some have argued against this report.

Writer Jeremy Arnold said that not selling shares in itself simply delays tax payments, as ProPublica brought up 'increased wealth in the ultra-rich' when calculating the 'true tax rate.' Just pointed out. He said that not paying taxes on assets that were not actually sold could not be blamed as 'tax avoidance.'

If you are taxing the assets you only own, you will need cash to pay the tax. Arnold said that forcing many shareholders to pay taxes according to the value of their shares would lead to a move to 'sell their shares to get cash to pay the taxes.' I'm expecting it. If shareholders living all over the United States sell their shares at once before and after the tax amount is fixed, there is a high possibility that the stock price will fall sharply and the stock market will be confused.

In fact, even for the average salaried person, the stock market acts as a savings pool through pensions and investment accounts, and no one wants the stock market turmoil, Arnold said. Therefore, there is a certain rationality in the method of taxing when selling stocks, and it is dangerous to simply look at the increase in assets of the ultra-rich people and deny it.

Arnold also said that the data used in this report included data protected by the Personal Information Protection Law, and that ProPublica's reporting attitude is also problematic from a privacy perspective. I did.