Oceana, a non-profit organization aimed at conserving the world's oceans, said on June 2, 2021, 'Many foreign fishing vessels, mainly in China, are illegally operating off the coast of Argentina while hiding their location information.' Announced. It is reported that these foreign fishing boats are overfishing tuna, marlin, bigfin reef squid, etc., which are important marine resources for the Argentine economy, by trawlers and squid fishing boats.

Oceana conducted a survey to monitor the waters on the border between the Argentinean waters and the high seas, using data from the Automatic Identification System (AIS) , which sends out ship names, nationalities, and location information. As a result, it was found that more than 800 non-Argentine-registered foreign fishing vessels have been operating for a total of more than 900,000 hours in about 3 years and 4 months from January 1, 2018 to April 25, 2021. It was. Of the 900,000 hours of fishing activity, 69% was due to Chinese fishing boats consisting of more than 400 vessels. On the other hand, 145 Argentine fishing vessels were active for 9269 hours, less than 1% of the total.

AIS is a device (PDF file) that automatically sends and receives the position, course, speed, etc. of a ship to prevent marine accidents. Based on AIS data, Oceana has determined that a large number of foreign fishing vessels are operating along The analysis also found that there were more than 6000 fishing activities with AIS off for more than 24 hours. Regarding this, Oceana said, 'Fishing vessels that cut AIS off the coast of Argentina hid their positions for a total of more than 600,000 hours and invaded the waters of Argentina to fish. 66% of these incidents were carried out by the Chinese fleet. We are doing it, and it is suspected that it is related to illegal activities. '

According to Oceana, a fleet of small squid fishing boats has been lost by turning off the AIS along the EEZ more than 100 times since 2018. As Oceana pointed out, illegal fishing by foreign fishing vessels has become a serious problem in Argentina.

For example, in April 2020, it was known that about 100 fishing vessels, mainly Chinese vessels, were operating in the EEZ of Argentina, but AIS was still off at this time. Collision with these illegal fishing boats and Argentina Coast Guard has evolved often up to violence, experts, 'It is a state of war with exaggerated Without' says .

In response to the findings, Oceana's Vice President of the United States, Beth Lowell, said, ' Such'illegal, unreported and unregulated fisheries (IUU fisheries) 'threate marine health and marine ecosystems. It will have a big impact on the lives of people who live close to each other. '

Mara Valentine, Head of Illegal Operations and Transparency Campaigns at Oceana, said, 'Our ocean needs protection, not the reckless fishing of China and other fleets. China's commercial fishing is of interest. As the days go by, it becomes clear that the range is wide and indiscriminate. The world must not ignore the impact of such a fleet on the sea. ' ..

You can find out more about the problems of the IUU fishery, which is often a problem in Japan, by reading the following site.

Below is a video of a foreign fishing vessel operating illegally in Argentine waters, taken by Argentine film actor and airliner pilot Enrique Piñeyro, inviting journalists into the plane.

All the lights seen from the window of the plane are from foreign squid fishing boats. In a Twitter post, Pinheiro said, 'We shot a fleet of foreign fishing vessels that preyed on our oceans and caused ecosystem destruction yesterday from 5,000 feet above the ground. They are inside, not beyond 201 nautical miles outside the Argentinean sea. ' 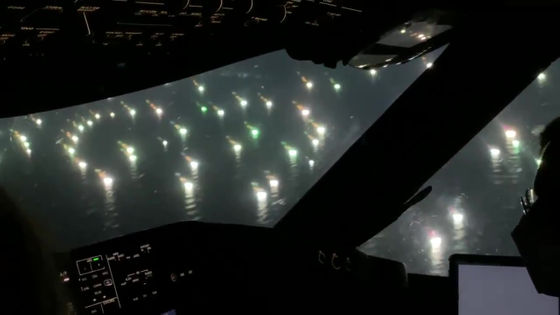