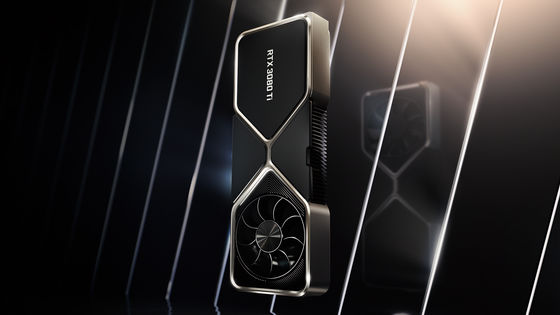 At Computex 2021, one of Asia's largest computer trade fairs, NVIDIA unveiled its high-end GPU, the GeForce RTX 3080 Ti. Since many reviews have been released from overseas media at once, I tried to see what kind of evaluation the RTX 3080 Ti, which has specifications approaching the current top model 'GeForce RTX 3090', is evaluated.

Announced on June 2, 2021, the 3080 Ti is a GPU with specifications approaching the 3090, which is the highest among the current models, and is positioned as a higher version of the 'GeForce RTX 3080'. The fact that the Ampere architecture is adopted for the GPU core and the number of design ports have not changed from 3080. The main change of 3080 Ti is the improvement of specifications such as graphic memory, and it is said that 'up to 1.5 times the processing speed is realized' compared to 'GeForce RTX 2080 Ti'. The specifications of 3080 Ti are 10,240 CUDA cores, 12GB GDDR6X video memory, 384-bit memory bus, 912GB / s memory bandwidth, and 350W TDP . 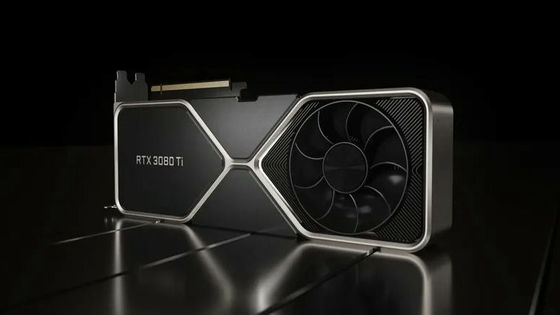 The Verge, who actually tested the 3080 Ti in two resolutions, 4K and 1440p, for a week, said, 'The performance of the 3080 Ti has improved the performance of the 2080 Ti, making it more stable to play the latest games. 'Something like', showing satisfaction with its performance. However, 'Unfortunately, the price tag is $ 1199, so even if there is no price increase due to the current GPU shortage, I think that the price will exceed the budget of most people,' he said in the first place. It also points out that is a GPU that is too expensive to be excluded from most people's options. The 3080 Ti has one fan on each side of the card, taking in cold air from the bottom fan and exhausting it from the CPU cooler on the other side and the fan closer to the rear case. This fan design makes the 3080 Ti quieter than the 3080, but under heavy loads the fan speeds up to maximum, 'the 3080 Ti fan spins at maximum speed much more often than the 3090. 'There are many,' said The Verge. The Verge also points out that this fan design caused the 3080 Ti to rise to temperatures around 80 degrees on a regular basis, not as good as the 3090 in terms of heat dissipation.

In addition, we have actually played and tested multiple games at 1440p and 4K resolutions on the 3080 Ti and Intel Core i9-11900K. Actually played for the Fortnight and CONTROL , Death stranding , METRO EXODUS , Call Of Duty: Warzone like.

The table below compares the frame rates when actually playing various games at 1440p resolution. You can see that most titles have the same performance as the 3090. RT refers to play with ray tracing turned on.

Below is a table summarizing the frame rates when playing each game at 4K resolution.


CNET highly evaluated the 3080 Ti as 'taking 4K games to a new level' and 'experiencing a 3-digit frame rate with high resolution'. However, 'it's not clearly better than the 3080. Many are system-dependent, so if a PC with good bus bandwidth and cooling is equipped with the 3080, it's a basic bus bandwidth and cooling. It can perform better than a PC with a featured 3080 Ti, 'he added, adding that the final performance has changed significantly due to configurations other than the GPU. 'There is no world where you can buy a GPU at a fixed price, so if you buy a 3080 Ti that is more expensive than a 3080, it may be more efficient to pass the difference on to other parts.' 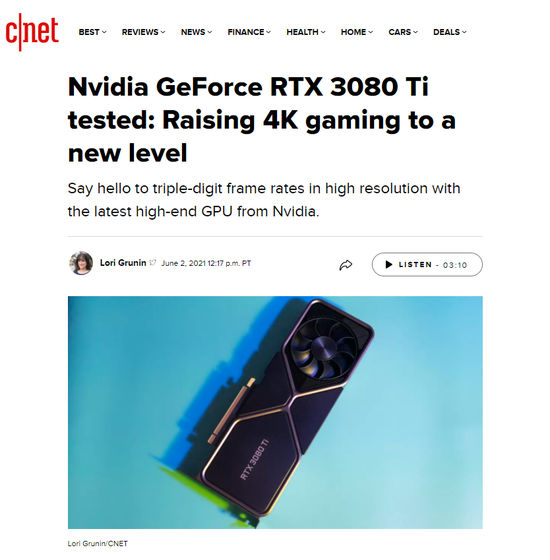 Engadget describes the upgrade from 2080 Ti to 3080 Ti as 'luxury'. This isn't a positive thing, and it raises questions about the need for the 3080 Ti, which is $ 500 more expensive than the 3080. He also pointed out that the current situation where there is a global shortage of GPUs is 'arguably the worst time to buy a new GPU.' In addition, Engadget said, 'Resellers buy GPUs and make a lot of money by reselling them at a high price. However, 3080 Ti is subject to hash restrictions so that it can not be used for mining crypto assets, so some demand Cannot be met. '

Engadget has two advantages of the 3080 Ti, 'much faster than the 3080' and 'excellent ray tracing performance', and 'much more expensive than the 3080', 'fans spin noisily and frequently', and 'basically' I mentioned three points that you wouldn't see at a store. The Verge cites quietness as an advantage of the 3080 Ti, while Engadget cites it as a disadvantage. The table below summarizes the benchmark score and frame rate for each resolution when playing benchmark software and various game titles with various GPUs loaded on a PC equipped with Ryzen 7 5800X and 32GB of memory (RAM). 3D graphics benchmark software '3DMark' Time Spy Extreme, DirectX 12 compatible graphics test score targeting CPUs with 4K resolution and 8 cores or more, 3080 Ti is from AMD's top model Radeon 6800 XT The score is high by about 1000 points.

PCWorld prefaced that '3080 Ti is a GPU that rich gamers should buy,' but pointed out that it was 'almost 3090' except for the name and memory capacity. GPU for 4K games with no major weaknesses, '12GB high-speed GDDR6X memory' 'Highest level ray tracing, DLSS 2.0 ' 'NVIDIA software such as Reflex , G-SYNC , ShadowPlay , Broadcast , RTX IO, DLSS' 'Excellent design' 'PCIe 4.0, Lite Hash Rate' etc. are mentioned as advantages. On the other hand, the disadvantages are 'significant price increase compared to 2080 Ti model', 'unique ugly 12-pin power connector', 'difficult to obtain due to lack of GPU worldwide', ' founders edition design is other RX30 model' It's not as effective as it is, and there are no additional features. ' 'The 3080 Ti is a GPU that only the wealthiest gamers can consider because it's so expensive,' VentureBeat said. 'If you have the money and need the best gaming PC, then the 3080 Ti. You can't miss the opportunity to get it, 'he said, making it a great choice for gamers who are financially affordable and looking for the best performance.

VentureBeat also said, 'The 3090 is a little better, but it's overkill for playing the game.' The 3090 has 24GB of memory, more than the 3080 Ti, but he also notes that this wouldn't make a difference unless you're a content creator. 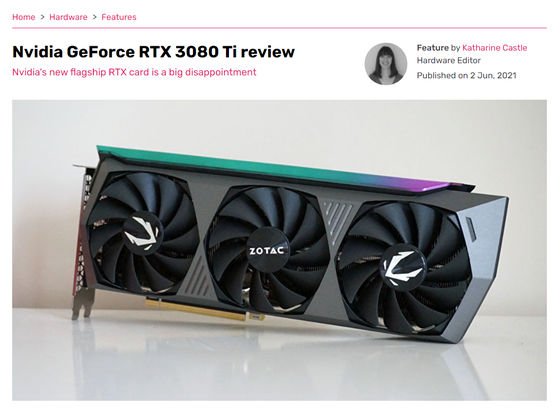