A large amount of space debris such as rockets and artificial satellite fragments are floating in the Earth's satellite orbit, and there is concern that it will collide with the International Space Station (ISS) and artificial satellites and cause serious effects. It has been. On May 28, 2021, the Canadian Space Agency reported that it had found 'traces of space debris collision' during a regular inspection of the ISS robot arm.

Space debris orbiting in satellite orbit is moving at speeds exceeding several kilometers per second, so even small debris can cause serious damage to artificial satellites and the ISS. Therefore, as many as 23,000 space debris with a diameter of more than 5 to 10 cm are monitored, and the ISS adjusts the trajectory to avoid it when it is determined that there is a risk of collision. However, innumerable space debris that cannot be tracked are floating in space, which poses a threat to astronauts and satellite operators. Canadian Space Agency on May 28, '' of the robot arm, which is mounted on the ISS Canada arm 2 in ', confirmed the damage caused by the collision with space debris' was reported.

You can see what the collision was like by watching the following movie.


In the center of the screen is Canadarm2, which has been operating on the ISS since 2001. Canadarm2 is an articulated titanium robotic arm designed by the Canadian Space Agency that is responsible for moving large payloads and assisting in docking with supply vessels. The diameter of the arm is 35 cm, and the length when all seven electric joints are extended will be 17.6 m. This is the 'trace of collision with space debris' discovered by the regular inspection of Canadarm2 on May 12. You can see that there is a hole in the middle of the arm. 'The analysis is ongoing, but the performance of the arm has not been affected. Damage is limited to a small portion of the arm rod and heat-resistant blanket,' said the Canadian Space Agency, which conducted a joint investigation with the National Aeronautics and Space Administration. It has been done, 'he said, and said he was still performing the work planned in advance. The Canadian Space Agency calls this case a 'lucky strike' because the performance of Canadarm2 was not affected despite the collision of space debris. 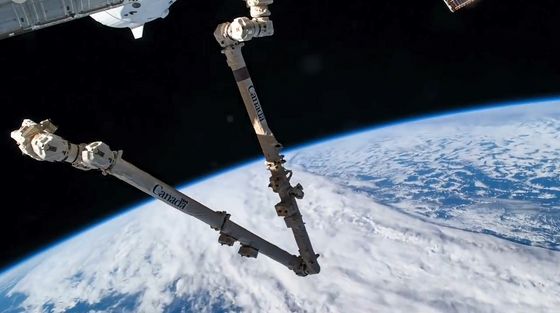 Canadarm2 is a symbol of space exploration in Canada, with a Canadian Arm2 design on the back of the

5 Canadian dollar bill , along with Canadian astronauts and the Dexters that make up Canadarm2.

Space debris has long been a threat to astronauts staying on the ISS, and in 2016 it was reported that a minute space debris collided with the window glass of the ISS observation module 'cupola ', resulting in a 7 mm scratch. it was done.