When you actually use 'VOICE AVATAR Seven Voices Nina' that anyone can easily become a beautiful girl voice from a browser for free, it looks like this DeNA has announced 'VOICE AVATAR Seven Voices Nina', a web service that allows you to convert your own voice into a character's voice. I heard that the voice recorded on the browser will be converted for free by the machine learning model by

PyTorch, so I actually tried using it.

When you access the above page , you can choose to turn the audio on or off. Both have the same service content, but if you turn on the voice, the greeting of Nina Nana and the system voice will be played. Select 'ON' this time. 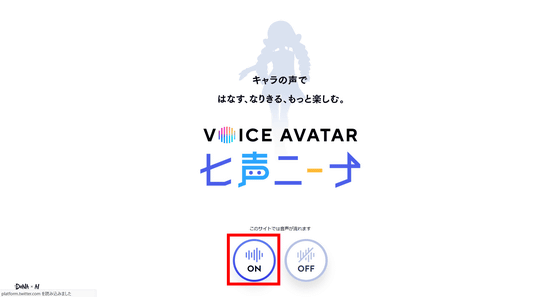 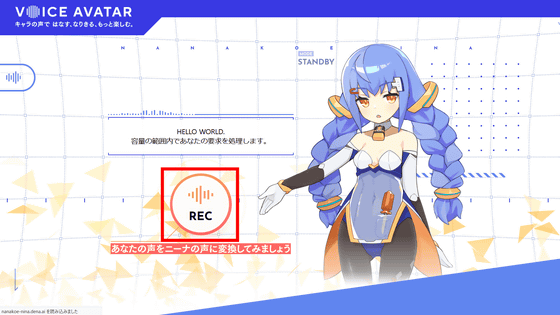 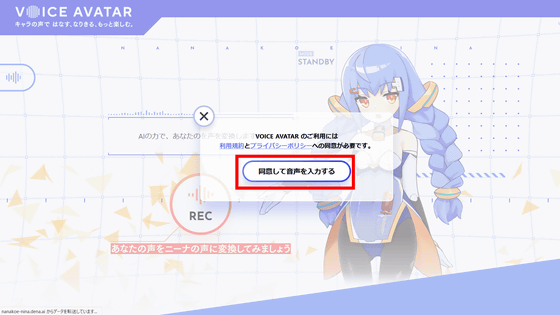 A pop-up asking for permission to use the microphone device will appear, so click 'Allow'. In addition, VOICE AVATAR Heptatonic Nina has been confirmed to start with Firefox (version 88.0.1) and Google Chrome (version 90.0.4430.93). 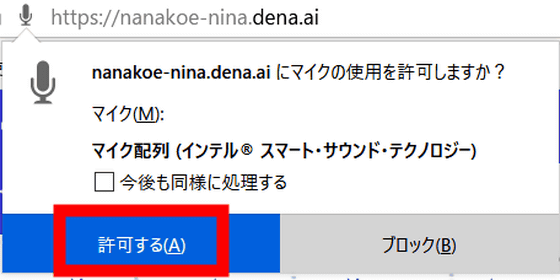 Recording starts when the 'REC' button becomes 'GO'. The maximum length of audio that can be recorded is 10 seconds. The result of the conversion by a male editorial staff saying 'I am a cat. I do not have a name yet' is as follows. Although the input voice has a unique way of speaking due to changes in intonation, the voice itself is smoothly converted into a girl's voice.


The following movie was tried by another male editorial staff. The pitch of the voice is lower than that of the first editorial staff, but it was converted to the same girl's voice. The intonation has also changed, and the way of speaking is a bit like a single word.


In addition, the following movie is where the female editorial staff was also imbued with the same lines. The input voice is completely different, but the voice quality of the output voice is the same girl's voice. However, the intonation varies greatly depending on the individual, and the impression is that some consonants are different. For example, the 'n' that comes at the beginning of 'name ha' has been converted to the same alveolar consonant 't' or 'd', and it sounds like 'name ha'.


Since Heptatonic Nina is under development, the reproduction accuracy of the phoneme part is not high, but in terms of 'converting a man's voice into a girl's voice without discomfort', it was possible to convert without discomfort. You don't have to enter the text of what you're talking about, you can record and convert in seconds. I would like to expect future development regarding the accuracy of conversion and the types of voices that can be converted.

In addition, Mr. Takemura of DeNA's Data Management Department AI Infrastructure Department summarizes what kind of technology is used for Heptatonic Nina on the official blog.