At the online technology conference 'GTC 2021 ' held by NVIDIA on April 13, 2020, we announced the next-generation AI-enabled system-on-chip (SoC) ' DRIVE Atlan' for autonomous vehicles that achieves 1000TOPS performance. DRIVE Atlan has 33 times the computing power of the SoC for self-driving cars that was put into practical use at the time of writing the article, and NVIDIA is aiming for practical use in 2025.

DRIVE Atlan is a specialized SoC for self-driving cars, including NVIDIA's next-generation GPU architecture, Arm-based CPU cores, deep learning and computer vision accelerators, as well as the complex computing and complex computing required for autonomous driving of self-driving cars. To support AI workloads, it is the first NVIDIA SoC to featureBlueField, a data processing unit (DPU).

Regarding the computing power of DRIVE Atlan, at the time of writing the article, the DRIVE AGX Xavier installed in mass-produced cars and trucks had a maximum of 30 TOPS (calculation performance of 30 trillion times per second), while the DRIVE AGX Orin had a maximum of 254 TOPS. DRIVE Atlan will be up to 1000 TOPS. NVIDIA also describes DRIVEN Atlan as 'an in-vehicle data center that provides enough computing power to build a software-defined vehicle.' 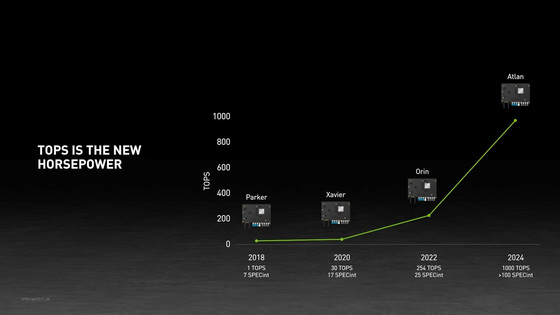 However, DRIVE Atlan is still under development and is aiming to be installed in the 2025 model and later. DRIVE Atlan is designed from scratch as hardware, but like DRIVE AGX Xavier and DRIVE AGX Orin, it

can be developed via the CUDA environment and Tensor RT API and library, so it seems that the existing technical investment can be utilized as it is. is. The 8th generation Hyperion controls the surroundings for autonomous driving, UI such as car speed display and air conditioning, multimedia function to play music and images, face recognition of occupants in the car, etc. with DRIVE AGX Orin. It is a system to do. According to NVIDIA, the 8th generation Hyperion will be released in the second half of 2021, and the keynote speech used the Mercedes-Benz concept car CG model in

partnership with NVIDIA in June 2020. In addition, NVIDIA has expanded its partnership with Swedish automaker Volvo and announced that it will equip Volvo vehicles with DRIVE AGX Orin in the future. The first DRIVE AGX Orin will be on the XC90 , which will be announced in 2022, combined with software developed by Volvo's subsidiary Zenseact and a steering and brake backup system, 'complete under certain conditions. It is said that it will realize level 4 automatic driving that enables 'automatic driving'.

NVIDIA CEO Jensen Huang said, 'The transportation industry needs a computing platform that can be relied on for decades. Software investment is huge and it's hard to repeat investment on a vehicle-by-vehicle basis. Impossible. NVIDIA DRIVE is a state-of-the-art AI and AV computing platform that can maintain architectural compatibility for generations with a rich, comprehensive software and developer ecosystem. Yes. Today, NVIDIA announced that it will take its roadmap to a new level. The new DRIVE Atlan is a truly amazing technology and NVIDIA's strengths in AI, automotive, robotics and safety. Combining all of sex and BlueField's secure data center will enable us to create a safe and autonomous fleet of vehicles. '

The keynote speech by CEO Jensen Huang can be viewed from the following, and the lecture on autonomous driving will start around 1 hour 35 minutes 21 seconds.