Chocolate is a popular confectionery for men and women of all ages, but it has long been pointed out that its production and distribution are causing environmental destruction and labor exploitation. A survey of 31 chocolate makers around the world shows that such problems still remain, and while there are manufacturers that are environmentally and working environment-friendly, there are many in Japan's Meiji and Morinaga. It was evaluated as 'obsolete' in that respect.

Is that a good egg? How chocolate makers rate on social and environmental measures
https://theconversation.com/is-that-a-good-egg-how-chocolate-makers-rate-on-social-and-environmental-measures-158125 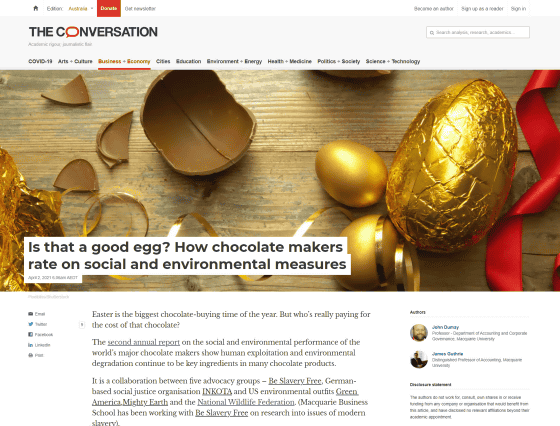 Valentine's Day is the best time to sell chocolate in Japan, but Easter is the day when egg-shaped and rabbit-shaped chocolates are sold in the United States. Five organizations, Be Slavery Free, INKOTA, Mighty Earth, Green America, National Wildlife Federation, and Be Slavery Free, who are working to protect the environment and human rights after Easter, are targeting 31 chocolate makers around the world. Are you taking social and environmental measures? '

This survey is an analysis of questionnaire responses from each manufacturer. The evaluation was made on the following 6 items.

Then, according to the evaluation, the companies were classified into 'market leader', 'having a good policy for action', 'effort required', and 'obsolete'.

As a result, 31 companies the United States of 'is had been classified as' market leader 'of the Alter Eco ', 'of Switzerland HALBA Sweet ', Dutch ' Tony's Chocolonely ', 'New Zealand Whittaker 4 only one'. All of them are evaluated as 'market leaders' in 5 out of 6 items, and only 1 item is 'have a good policy for action'. 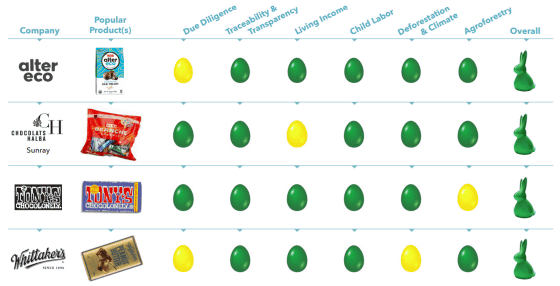 Most of the popular American

manufacturers such as Mars , Mondelez , and Nestle were 'having a good policy for action' and 'requiring effort', and there was only one item that was evaluated as a 'market leader'.

And ITOCHU, Meiji, and Morinaga had the lowest ratings among the 31 companies, and most of them were 'obsolete.' However, it was also noted that Japanese companies 'evaluate Valentine's Day and include additional questions.' 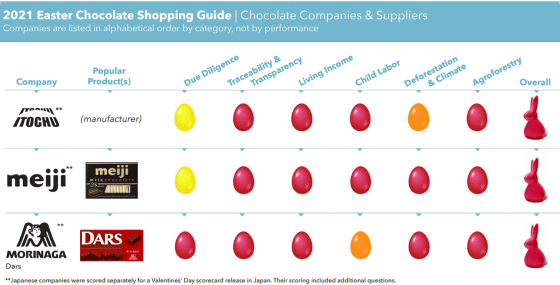 In addition, it seems that there were four companies such as Starbucks who did not respond to the survey. 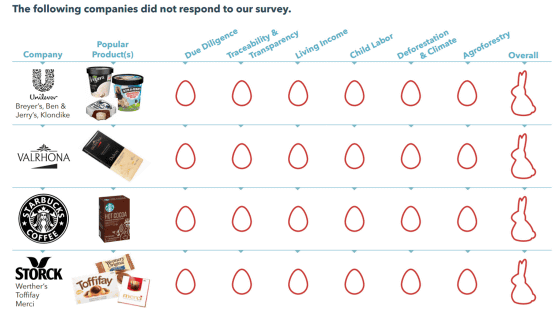