Where did 'Coinhive', which uses the user's CPU without permission to mine virtual currencies, disappear? Troy Hunt, who took the position of Microsoft's

Regional Director and created a service such as 'Have I been Pwned? ' That checks whether e-mail addresses have been leaked, is a technology that uses the user's CPU without permission to perform mining. Announced that it has acquired the domain of Coinhive. Coinhive is no longer in service, but Hunt said the impact of Coinhive still remains, and he wrote more about it on his blog.

Coinhive is a technology that allows you to mine virtual currencies by simply embedding a script in a website and using the CPU of the user who browsed the website. In the past, to embed the script to a large number of browsing it manages web site problems and, embed the script to the site where another person to manage, such as to mine the virtual currency for their own problems have occurred I did.

Following numerous criticisms, Coinhive shut down in March 2019 and all mining has ended. Then, Mr. Hunt who noticed this acquired the domain of 'Coinhive.com' in May 2020 and records the access to Coinhive.com.

Coinhive.com recorded a unique number of visitors of about 100,000 per day, even though it was set to generate a 404 error when trying to access it. 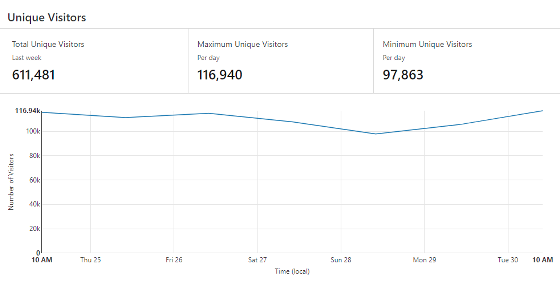 Hunt also provides a table showing which countries have the most traffic. Below is a table of 'Have I been Pwned' prepared for comparison. 'I don't want to draw stereotyped conclusions about the relationship between Russian and Chinese hackers, but that's not the case,' Hunt said.

Hunt is still concerned that many websites still have Coinhive scripts embedded in them. Mr. Hunt has changed to display the following pop-up when the user accesses the site where the script is embedded so that the administrator of the website will notice it. In addition, he says he has created a feature that refuses to embed a new Coinhive script and automatically notifies the website administrator.

He also publishes code running on Coinhive on GitHub and wants you to come up with suggestions to help both users and website owners.