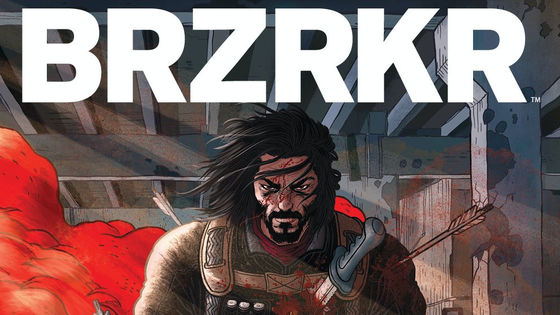 Exciting news! Netflix is developing a live action film AND follow-up anime series based on Keanu Reeves' BRZRKR, a brutally epic saga about an immortal warrior's 80,000 year fight through the ages. Reeves will produce and star in the film, and voice the anime. pic.twitter.com/RVWEuBCXTJ

'BRZRKR' is Keanu Reeves is American comic writer Matt Quinto in American comics that are co-authored with, illustrations famous as the Marvel work illustrator Ron Gurney , color ring Bill Crabtree, Retara is Clem Robbins, Rafael Grandpa is in charge of character design and cover design, and BOOM! Studios is in charge of publishing. Released on March 3, 2021, 'BRZRKR' was a huge hit with sales of more than 615,000 copies in just three weeks, and for BOOM! Studios, it was 'the most in the last 30 years.' It is said that it is a 'new title sold'.

This work, which is written as 'BRZRKR' and read as 'berserker', is an American version of the idea that Keanu Reeves has warmed up over the years. The synopsis says, 'A cruel epic about the 80,000-year-old timeless battle of an immortal warrior,' and the main character is a demigod, half-man 'B.' After centuries of wandering, 'B' chooses to take on a cruel battle for the US government. In exchange for this contract, 'B' will have a secret of his birth and a way to end the long-held battle. In addition to Keanu Reeves, Ross Richie and Stephen Christie of BOOM! Studios and Stephen Hamel of Company Films will be the producers of the filmed 'BRZ RKR'.