The U.S. Navy is seriously reconsidering 'cold fusion,' which was said to be the largest scientific scandal of the 20th century. 'Cold fusion, ' which causes fusion in a room temperature environment, has been scientifically denied because of its low reproducibility, although there have been some reports that 'experiments have been successful.' However, the US Navy is seriously reconsidering the cold fusion research that has been conducted so far, the journal 'IEEE Spectrum' of the American Institute of Electrical and Electronics Engineers reported.

Research on cold fusion is being conducted by a team of scientists fromthe Indian Head US Navy Naval Surface Warfare Center (NSWC IHD). The NSWC IHD research team is working with the Army and the National Science Foundation group to verify previous research, including 'whether cold fusion really exists.'

Nuclear fusion is the fusion of light atoms, such as hydrogen, into heavier atoms. For example, when a deuterium atom composed of one proton, one neutron, and one electron collides with a triple hydrogen atom composed of one proton, two neutrons, and one electron to cause a fusion reaction, Two protons, two neutrons, and two electrons, helium, are produced, and enormous energy is released at the same time. 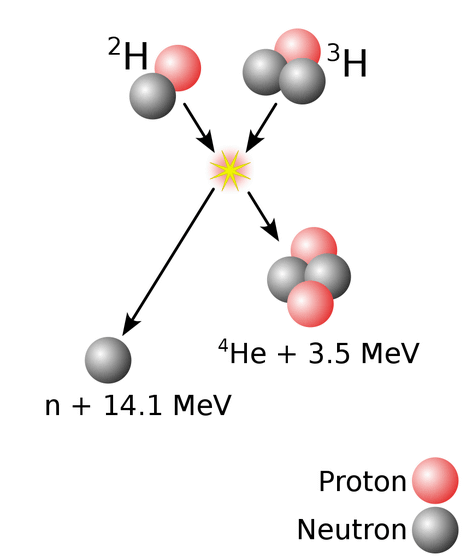 Unlike nuclear fission, which reacts in a chain reaction, nuclear fusion has a mechanism that does not run away in principle, so it is appealing that it is relatively safe. However, in order to continuously cause a fusion reaction, high temperature and high pressure exceeding 100 million degrees are required, and a very strong superconducting magnet and a facility that can withstand fast neutrons ejected by the reaction are required. It has not been put into practical use even at the time of creation.

Martin Fleischmann , a chemist at the University of Southampton, and Stanley Pons , a chemist at the University of Utah, said that such a fusion reaction 'could occur in a room temperature environment using simple equipment.' Presentation. 'When I put the palladium and platinum electrodes in a container of heavy water and passed an electric current, they claimed that excess heat and neutrons were detected. The report that the fusion reaction, which requires a high-temperature and high-pressure environment, could be confirmed in a room temperature environment had a great impact on the world, and many scientists conducted additional tests. However, no reproducible examples were reported to significantly support the existence of cold fusion, and it became clear that the Fleischmann and Pons experiments were conducted in an unreliable manner. I can't say it. ' As a result, cold fusion, which began with the reports of Fleischmann and Pons, has become known as the ' largest scientific scandal of the 20th century.'

Although the existence of cold fusion is skeptical by most scientists due to the denial of Freishmann and Pons' reports, many researchers continue to study cold fusion.

For example, a Google research team collaborated with researchers at the Massachusetts Institute of Technology, the University of British Columbia , and Lawrence Berkeley National Laboratory under the title 'Revisiting the cold case of cold fusion.' Was published in the academic journal Nature in 2019.

In this treatise, Google's research team revealed that they spent $ 10 million on cold fusion research over a five-year period starting in 2015. Furthermore, as a result of the research, although no evidence was found to support the reports of Fleischmann and Pons, it was suggested that 'cold fusion may occur due to the local high temperature of the metal even in a normal temperature environment'. According to Karl Gotzmer, a senior researcher at NSWC IHD, research on cold fusion has begun in earnest at NSWC IHD, supported by this Google treatise. 'Frankly, other researchers who have been studying cold fusion for many years thought that'if you start cold fusion, your career will end,'but NSWC IHD is the government. As long as we can expect scientific results from our research facility, we have the freedom to pursue controversial themes. '

'We want to do good science,' said Oliver Barham, project manager at NSWC IHD. 'We don't prove or disprove anything, we take the theme seriously. I want to bring together a team of scientists who can help me. '

The research team will scrutinize and analyze the literature and data on cold fusion that have been accumulated over the past 30 years, and seek out the commonalities of the most suitable metals and experimental equipment for experiments. The research team says it hopes to publish the first research results within 2021.

'The most important thing is to clarify the mechanism of each phenomenon. Once the mechanism is known, it will be possible to carry out more accurate experiments and more reproducible experiments,' said Gotzmer. .. 'We look forward to getting good results from the brain population we have gathered,' said Barham.