I drank 'UCC COLD BREW BLACK PET 500ml' which has a refreshing and light response and a strong scent. From around 2017, the existence of black sugar-free small PET bottle coffee has been spreading. Meanwhile, UCC launched a new brand 'UCC COLD BREW ' and launched a new product on March 22, 2021 (Monday) because the frequency of drinking coffee increased due to the change in the drinking scene due to the corona disaster. So I drank it right away.

'COLD BREW' is roughly a 'cold brew coffee'. Normally, coffee is made with boiling water, but cold brew coffee is made by extracting it with water over a long period of time. Compared to making with hot water, the amount of caffeine and tannins that dissolve out is reduced, resulting in a taste with less bitterness and astringency.

The appearance of 'UCC COLD BREW BLACK PET 500ml' looks like this. The catch phrase 'COLD BREW is no longer fragrant brew.' You can experience 'taste the scent after drinking'. 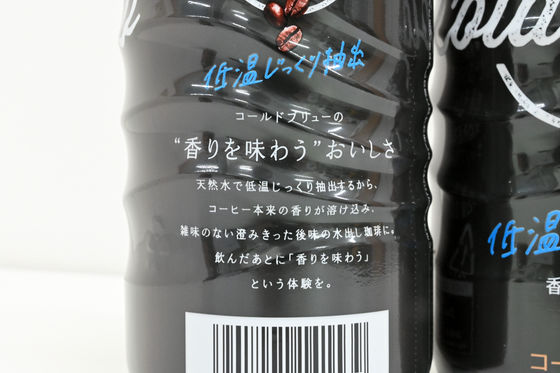 Aluminum bottles that have internal pressure applied can be opened without shaking to prevent the contents from spurting out when the bottle is opened, but this is because the ingredients may precipitate, so it says 'Please shake well and drink.' I will. The raw material name is 'Coffee (domestic production)' only. In addition, the nutrition facts label also shows zero calories, 0 g of protein, 0 g of fat, and 0 g of carbohydrate (0 g of sugar). Only salt equivalent, 0.001g-0.08g per 100ml. When you pour it into a glass, it looks like this. From the time of opening, the fluffy and bitter coffee scent spreads. The taste is like water, with less bitterness and astringency, and a fairly light taste. 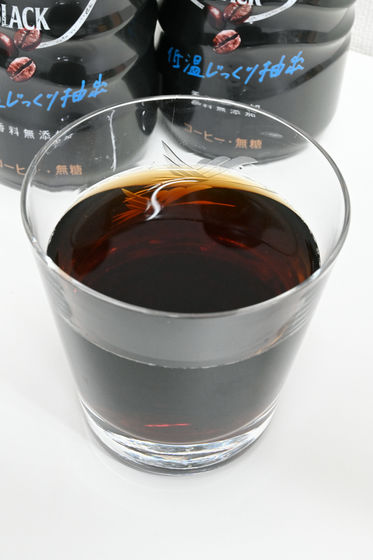 how 'light' this is with 'BLACK sugar-free FULL BODY recap can 375g ' which is the same UCC black sugar-free coffee. As expected, 'FULL BODY', which has a 'mellow fragrance and deep richness', is so bitter that people who are not good at coffee will feel 'Uh'. There is also a strong scent that responds to the bitterness. When you drink 'COLD BREW' again, you can see that the bitterness and astringency have clearly disappeared, and the arrangement is easy to drink. On the other hand, although the taste is light, the scent stands out firmly, so it can be said that 'COLD BREW' is suitable for people who 'do not need bitterness but like the scent of coffee'.