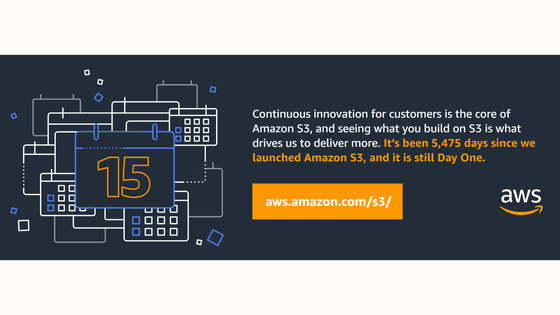 The object storage service 'Amazon Simple Storage Service (S3) ' provided by Amazon Web Services (AWS) celebrated its 15th anniversary in 2021. To commemorate this, AWS has announced on its official blog that it plans to make major updates to Amazon S3. 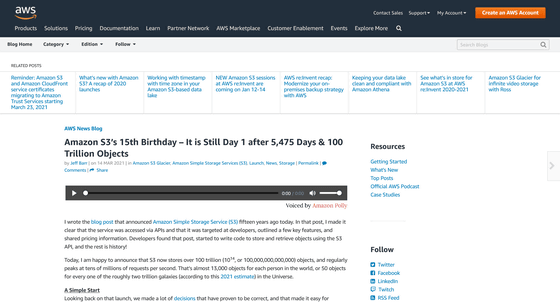 Amazon S3 is a type of object storage service with unlimited capacity and was rolled out on March 14, 2006 as 'the first AWS service available to the public.' Amazon S3 is popular because it has a simple service interface that allows you to store and retrieve data anytime, anywhere. From the beginning of the rollout, the concept of Amazon S3 was conscious of 'it is a simple service', and it was understood that '1 dollar (about 103 yen) can use about 50 GB of highly durable storage' The easy plan was also highly evaluated .

In a blog post announcing the Amazon S3 rollout, AWS said, 'Using the SOAP and REST interfaces, developers can easily store any number of data blocks in S3. Each block can be up to 5GB in length. , Associated with a combination of user-defined keys and additional key or value metadata. In addition, each block is protected by an access control list, allowing developers to keep their data private as needed. , You can share it for reading, or you can share it for reading and writing. '

In addition, the extremely high durability of 99.9999999999% is one of the major features of Amazon S3. According to an AWS blog post , its durability, also known as 119 (Eleven Nine), means that if you store 10,000 objects in Amazon S3, one of them will break on average 1 in 10 million years. There is a probability of times. AWS says, 'You just have to store your data in S3 without worrying about backups and scaling, device failures, fires, thefts, meteorites, earthquakes, toddler mischief, and more.' 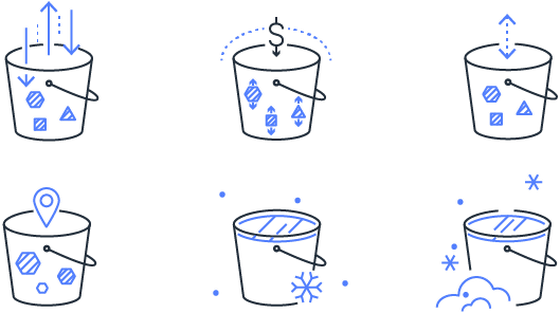 According to AWS, Amazon S3 stores over 100 trillion objects at the time of article creation, peaking regularly with tens of millions of requests per second. The number 100 trillion is too big to pinpoint, but 'it's about 13,000 times the world's population, or about 50 times the total number of galaxies in the universe,' AWS explains.

To commemorate the 15th anniversary of the Amazon S3 rollout, AWS will hold an online event called 'AWS Pi Week' for four days from March 15th to 18th, 2021 to manage system version, storage classes, and storage. Announced that it will announce important additions to security and data movement.

In addition, an infographic has been released about what kind of updates are planned.