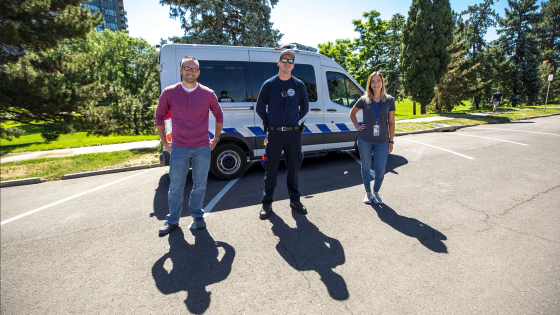 On February 8, 2021, it was reported that a new program, 'Medical workers, not police, respond to non-violent incidents,' which began in

The Denver STAR program that replaces police with mental and behavioral health counselors is working --Denverite, the Denver site!
https://denverite.com/2021/02/02/in-the-first-six-months-of-health-care-professionals-replacing-police-officers-no-one-they-encountered-was-arrested/

On June 1, 2020, mental health clinicians and paramedics patrolled the city in white vans to respond to less urgent matters such as mental health with the Support Team Assisted Response program. Program: STAR) ”has started. The program aims to avoid clashes with uniformed police officers by directing people to counseling and aid facilities.

According to reports, STAR responded to 748 cases in the first six months, did not require police in all cases, and no one was put in jail. The STAR team toured areas where STAR was thought to be in high demand from 10 am to 6 pm on weekdays and dealt with nearly 6 cases a day, but it was reported to the Denver police station. Since it is judged that 3% of the emergency calls that come in, about 2,500 or more, can be dealt with by STAR, it is reported that 'there are still not enough personnel and cars to deal with all cases.'

According to reports, the age group of people responded by STAR varies from 18 to 65 years. The most common case was illegal stay in public facilities due to mental health problems, and the number reached more than 200. Looking at the graph below, in the item of INCIDENTS THAT LED TO CONTACT (triggered incident), Trespassing (illegal invasion) is the first place, and in the item of PRIMARY CONCERNS (main cause), Mental Health is in addition. You can see that it is ranked first with a big difference. One of STAR's social workers, Curly Cylon, said, 'A woman stayed in the store because of mental health problems, but the police rushed to call STAR and were able to deal with it on behalf of the police. There was a case. STAR was launched by Roshan Bliss, co-chair of the

Denver Justice Project, a civil protection organization in Denver . Mr. Bliss has been searching for a way to curb police violence for a long time , and in 2017 he was planning with the cooperation of then Denver police commander Paul Pazen, but in 2018 Mr. Pazen Becomes the police chief and the plan is in full swing. In 2019, I visited Eugene, Oregon, which has been conducting a program ' CAHOOTS ' that is almost the same as STAR for more than 30 years, and used this as a reference to create the framework of the plan. And in 2020, STAR started in June 2020, when people began protesting police atrocities with the death of George Floyd , and Mr Bliss's plan became a reality.

'STAR is a great program and we want to make 24-hour service available to people all over Denver,' said Pazen. The program is expected to be funded by the city's budget and sales tax-funded mental health fund.