Packard, married in 1938, and his wife Lucille rented the ground floor of a house at 367 Addison Avenue in Palo Alto , California. The monthly rent for this house is $ 45 (about 85,000 yen in modern terms), and the deciding factor for renting it was that there was a garage for cars that could be used as a factory. Hewlett lived in a small hut next to the garage.

The photo below shows the garage restored to its 1939 state. This small garage is also known as 'the birthplace of Silicon Valley' because Hewlett-Packard is the ancestor of Silicon Valley startups. The inside of the garage looks like this. It's a garage for one car, not that big. 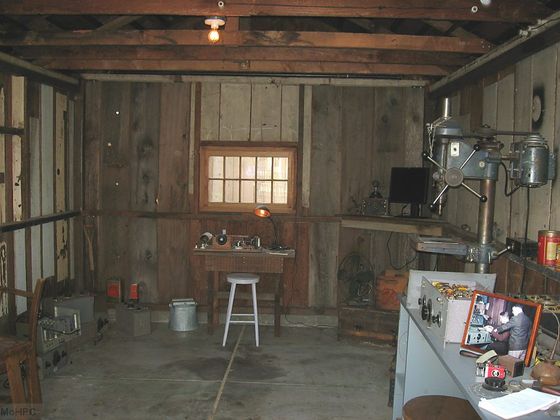 It seems that Hewlett-Packard at the time of its founding had not decided what to make, and he was trying ideas such as devices that use electricity to promote muscle activation. Eventually, the two decided to build an audio oscillator that would be used to test audio equipment, based on a study that Hewlett was doing at Stanford University.

The box-shaped device in the shelf on the right in the photo below is the HP 200A audio oscillator that they first released. Packard later said that the name '200A' for the first product was due to the idea that 'this would look more like a company with a lot of experience with Hewlett-Packard.' Disney , an animation producer. Disney, who wanted an audio oscillator to make the movie ' Fantasia, ' asked Hewlett-Packard to make some changes to the functionality of the 'HP 200A,' and eight improved 'HP 200Bs.' I heard that I bought it.

There is a radio set on the desk in the back of the garage. It seems that an antenna-like object was found in this area during the restoration work of the garage, and it is believed that Packard, who had been interested in radio since he was a child, enjoyed his hobby radio in the garage. This is the house where the Packards lived. It is impossible to complete all the work in the garage alone, and the painted audio oscillator is said to have been baked in the oven in the kitchen. The desk in the hut where Hewlett lived looks like this ... Looking back, it's surprisingly narrow that there is only a simple washroom and bed. Actually, the floor at that time was soil, and it was said that there was a bare toilet, but Hewlett, who liked the outdoors, did not care about where he lived.