In recent years, it has become possible to access various contents on the Internet from smartphones, and the number of young people who have become widespread with smartphones is increasing without a PC. However, in 2020, the pandemic of the new coronavirus increased the demand for PCs used for remote work and remote learning, and it is reported that the PC market in 2020 has achieved the largest growth in the past 10 years. I will.

PC Sales Remain on Fire as Fourth Quarter Shipments Grow 26.1% Over the Previous Year, According to IDC
https://www.idc.com/getdoc.jsp?containerId=prUS47274421 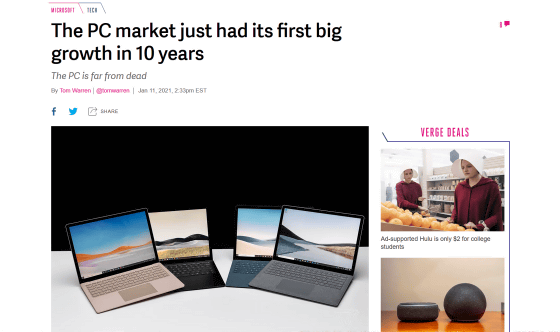 In 2020, when the pandemic of the new coronavirus occurred, measures such as urban blockade were taken in each country, companies promoted the introduction of remote work , and universities shifted to remote learning . Due to these effects, the demand for PCs required for video conferencing is rapidly increasing, and the shortage of notebook PCs has become a problem .

In the first quarter of 2020, PC shipments decreased from the same period of the previous year due to the disruption of production and distribution due to the pandemic, but in the second and third quarters , shipments significantly exceeded the same period of the previous year. Initially, the increase in demand was seen as temporary, but PC shipments are still strong in the fourth quarter of 2020.

Market research firms Canalys and IDC both said that PC shipments, including desktop notebook workstations , exceeded 90 million units in the fourth quarter of 2020, more than 25% year-on-year. I am reporting.

The table below shows the results of Canalys' survey on PC shipments in the fourth quarter of 2020. The top five companies in the market share are Lenovo, HP, Dell, Apple and Acer, with PC shipments of 90.3 million units and a growth rate of 25.4% in the entire market.

The table below, which shows the results of the IDC survey, is almost the same as the results of the Canalys survey, although there are minor differences. According to IDC, PC shipments in the fourth quarter of 2020 were 91.6 million units, with a year-on-year growth rate of 26.4%.


This is a table showing the results of the entire 2020 survey released by Canalys. All of the top five companies have significantly increased their shipments from 2019, with annual shipments of the entire PC market surpassing 297 million units and a year-on-year growth rate of 11%.


According to IDC's survey results, the total number of PCs shipped in 2020 exceeded 300 million units, and the growth rate was 13.1% year-on-year.


Foreign media The Verge says the 2020 PC market has grown the most since 2010. Ryan Reith, Program Vice President of IDC, points out that while the growth of the PC market in 2020 was driven by remote work and learning, people are starting to look at PCs as just entertainment. “While the clear impetus for growth in 2020 was focused on the needs of remote work and distance education, we must not overlook the strength of the consumer market. We are the highest ever in gaming PCs and monitors. Chrome-based devices are expanding beyond education into the consumer market, as we monitor our sales, 'said Reith.

'The digital transformation the world has made over the past year has been unmatched, and the PC has been at the heart of it,' said Rushabh Doshi, research director at Canalys. A few years ago, it was sometimes said that the PC era was over, but The Verge argued that 2020 was certainly a year to prove the value of PCs.