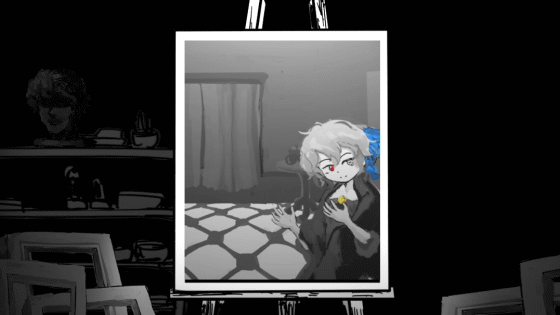 ' Matsuro Paretto ' is a free-to-play adventure game where you spend 7 days with the girl in the painting. I actually played this work, which was developed by individual game developer

Furifura and won the category award in the Google Play Best of 2020 Indie Game category.

'Matsuro Paretto' has been released for iOS and Android, but this time I will play with the Android version. First, search for 'Matsuro Paretto ' on Google Play to install the game, and tap 'Install'.

When the installation is complete, tap 'Open' to launch the game.

When you start 'Matsuro Paretto', it looks like this. Tap 'Start' to start the game.

One day the player is trapped in the room where the painting is placed. The paintings in the room are cursed and will be killed if the girl's wishes are not fulfilled.

The player decides to fulfill the girl's wishes to live and escape from the room. The first girl's wish was 'I'm hungry so I want to eat something.'

When listening to the girl's wishes, the in-game mobile phone receives an incoming call and at the same time the real-world smartphone vibrates. If you check the incoming call while being surprised at the effect that the smartphone vibrates suddenly, you can see that there was a person who was also trapped and tried to fulfill the girl's wish before the player was trapped. It was also found that the lord of the memo fed the girl a 'peeled apple.'

So, to get an apple, tap the arrows on both sides of the screen to explore the room ...

I found an apple in the corner of the room.

Swipe the apple into the painting to feed it. This time I decided to draw an apple on the girl's shoulder.

Once you've decided where to draw the apple, the different colors will start spinning like roulette. This time, in order to feed the 'peeled apple', aim for yellow and tap the screen at the right time to stop the roulette.

Succeeded in painting an apple in yellow and drawing a 'peeled apple'. However, the girl does not like the position where the apple is drawn.

The girl gives some disturbing words, 'I like putting apples near my head.'

When I say 'The girl will decorate it beautifully!', The screen goes dark ...

The player was hit by 'something hard' in his head and died. It's frustrating as it is, so tap 'Retry' to try again.

This time, I was able to satisfy the girl by drawing an apple on the girl's hand instead of on her shoulder. You can check the flow of deciding the position to draw the apple and selecting the color in the following movie.

I tried feeding a girl an apple with 'Matsuro Paretto' --YouTube


When the girl's wish was fulfilled, the brooch she was wearing turned yellow, the same as an apple. Apparently, as the wish is fulfilled, the black and white girl's painting gradually changes color.

The girl's second wish is, 'I always eat the same fruits, so I want to eat different colors and tastes.'

So, I thought, 'Let's eat an apple of a different color than usual,' and drew a blue apple on the desk, but 'Maybe I want to dream of being buried in an apple?' It's gone.

I found a macaron while exploring the room without giving up.

I put the blue macaroons on the desk, thinking, 'I would be happy with the macaroons of a color that does not overlap with any of the fruits on the girl's desk.' If you are interested in whether or not you like the girl, please play for yourself.

At 'Matsuro Paretto', we will fulfill the girl's wishes with hints from incoming calls entering the mobile phone and the girl's words. Many of the girl's wishes are cute, such as 'I want to eat food' and 'I want someone to talk to', but if the girl is in a bad mood, she will be killed, so I managed to make a painting that would satisfy the girl. You have to use your head to add it. Also, even if you make the same wish, the end of the player will differ depending on how you draw the picture, so it is one of the pleasures to check what kind of end you will follow if you make a mistake on purpose.

'Matsuro Paretto' is a serious game that is killed immediately, but it is a work that can be recommended for people who are not good at horror games because there are no images or surprises that arouse fear.