Scientists spend 20 years solving the mystery that 'when it rains, a large number of coho salmon die in the river' Living in the northern Pacific Ocean region coho salmon are born in fresh water of the river, down to the sea from the living one to two years in the river, I come back to again and it is time to spawning rivers Fuumi type is the fish. Researchers who investigated the mystery that 'a large number of river coho salmon die when it rains' in Washington State, USA, have found the cause over about 20 years.

How Scientists Tracked Down a Mass Killer (of Salmon) --The New York Times
https://www.nytimes.com/2020/12/03/climate/salmon-kill-washington.html

Coho salmon, a sea-fall type fish, returns to the river at the time of spawning, but due to changes in the environment such as estuary shrinkage and dam construction, the number of individuals has decreased in Seattle, Washington. Around 2000, Seattle officials spent millions of dollars on a project to restore rivers along Puget Sound , reviving vegetation and reducing riverbed mud, and finally coho salmon. I'm back in the Seattle river.

However, after it rained in the surrounding area, the river coho salmon had a strange way of swimming, and more than half of them died. It is said that 90% of coho salmon died in large numbers in some rivers. This bizarre coho salmon mass mortality has been reported throughout the Pacific coast, and biologists have set out to investigate the cause.

On the left of the photo is Associate Professor Edward Kolodziej , a member of the research team and an environmental engineer at the University of Washington, and on the right is Associate Professor Jenifer McIntyre of Washington State University. 'In the early years of the study, we had a fierce debate about what caused the mass mortality,' said McIntyre, who was surprised to see such a large number of fish dying. by Mark Stone / University of Washington

The research team investigated the metal concentration, chemical substances, and water temperature in the rivers in the urban areas where coho salmon died, but did not get any clear clues. In addition, although the situation in which coho salmon died seemed to be oxygen deficient, the oxygen concentration in the water was not low, and the theory that it was caused by infectious diseases and pesticides was denied.

A research team that compared rivers that had mass deaths over several years with rivers that did not, and considered situations such as 'mass deaths occur after it rains,' said, 'Materials on the road flow into rivers with rainwater. Isn't that the cause? ' To confirm this hypothesis, the research team conducted a test to expose coho salmon to water containing chemicals that could spread on the road, such as heavy metals used in cars and motor oil. However, it seems that coho salmon did not die even when exposed to water containing high concentrations of these substances.

Therefore, the research team conducted a similar experiment by collecting rainwater that was actually washed away from the road, not in an experimental environment. Then, Coho salmon died showing the same symptoms as the mass death seen in the river. McIntyre believed that chemicals that people weren't paying attention to killed coho salmon, as the water was taken from ordinary roads, not where it was particularly heavily polluted. .. Zhenyu Tian, the lead author of the treatise, said, 'We knew that a chemical that appeared to be toxic consisted of 18 carbons, 22 hydrogens, 2 nitrogens, and 2 oxygens. And I tried to figure out what this was. ' However, the substance used in the tire does not contain such a chemical substance, and it seems that he did not understand why this substance exists in the solution soaked in the tire.

Mr. Tian had been worried for a while, but one day, 'The substance in question was not added to the tire in this state from the beginning, but after it was added, it caused a chemical reaction and it became this state. Isn't it? ' When I searched for a chemical substance that matches carbon and nitrogen, excluding oxygen and hydrogen, which are easily reacted, I finally arrived at a substance called '

6PPD ' that is used as a tire deterioration inhibitor.

As a result of the investigation, it was found that when 6PPD hits the road, it reacts with ozone gas to produce the chemical substance in question called ' 6PPD- quinone '. When coho salmon was actually exposed to water containing 6PPD-quinone, it was confirmed that coho salmon died of symptoms such as oxygen deficiency. The mechanism by which 6PPD-quinone kills coho salmon is unknown, but McIntyre believes that 6PPD-quinone may act on the vascular system of coho salmon. 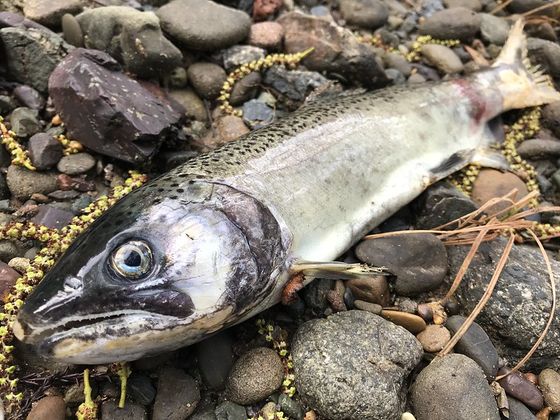 The research team is in talks with the tire industry, hoping that manufacturers will find alternative anti-deterioration agents, as well as investigating their impact on other fish. The research team is also concerned about the impact on humans, as tires are often recycled to stadium artificial turf. Kolodziej pointed out that humans are creating new chemicals at a speed that is not fully understood, and that some artificially created chemicals are unrecognized and harmful.