The box office revenue of the movie version 'Demon Slayer: Kimetsu no Yaiba' infinite train edition released on October 16, 2020 (Friday) exceeded 30 billion yen including the figures on Saturday and Sunday in the 9th week of release understood.

The movie version of 'Demon Slayer: Kimetsu no Yaiba' infinite train edition, mobilized 22.539,385 spectators (box office revenue of 30,289,307,700 yen) in 59 days. Thank you very much for visiting us every day for about 2 months. We would like to express our deep gratitude for the screening of MX4D and 4DX from December 26th. I hope you enjoy it. #Demon Slayer: Kimetsu no Yaiba

Due to the influence of the new coronavirus, there were a series of works that delayed the release time, and the movie version 'Demon Slayer: Kimetsu no Yaiba' will be screened up to 42 times on the first day of its release . It was released on an unusual scale, with 20 movie theaters showing more than 35 times .

As a result, 3.42 million people were mobilized during the three consecutive holidays from the release date. Box office revenue also recorded 4.6 billion yen in just three days . Since then, the numbers have been steadily increasing, and from Saturday, December 12th, we will start distributing the 'Visitors Thank-you Special Book', which is a privilege for visitors.

Starting today, we will start distributing the 3rd 'Thank you for visiting special book' to a total of 750,000 people nationwide.

The box office revenue of 'Demon Slayer: Kimetsu no Yaiba' and the transition of the number of spectators are as follows. As expected, two months after its release, the momentum has slowed down, but even in that state, you can see that it is a terrifying work with box office revenue of 1 billion yen per week.

The unit of the vertical axis of box office revenue is '100 million yen'. 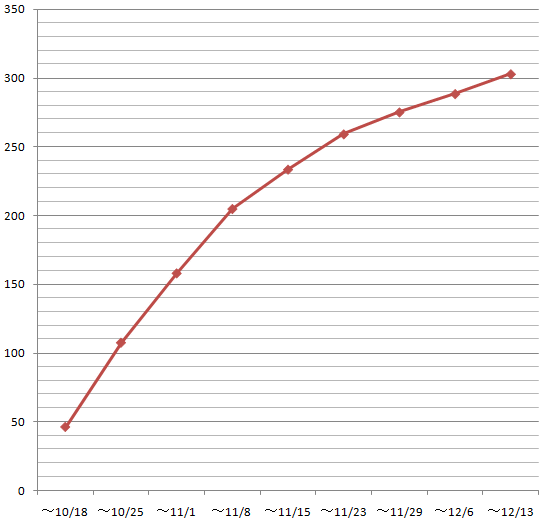 The unit on the horizontal axis of the number of spectators is '10,000 people'. 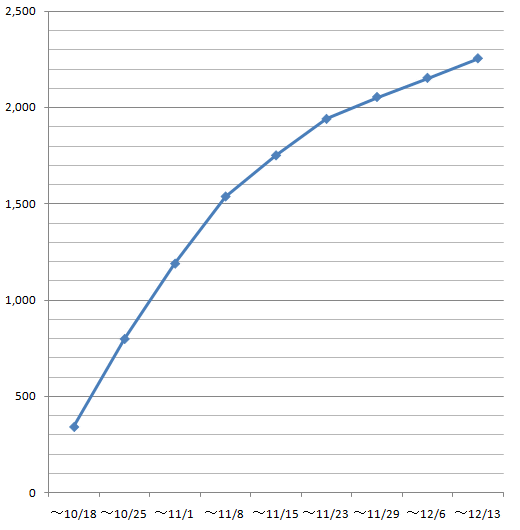 Broadcast of ' # Devil's Blade Pillar Joint Conference / Butterfly House Edition' has been decided!
It will be broadcast nationwide on Fuji TV from 18:59 to 21:14 on Sunday, December 20th. A special edition with new footage created for this broadcast, including newly provided illustrations and special end rolls drawn by ufotabel! pic.twitter.com/81e9bktOi4

By the way, the original manga ' Demon Slayer: Kimetsu no Yaiba ' started serializing in Weekly Shonen Jump in 2016, and an animation project was announced in 2018. The name is listed alongside 'Land of the Lustrous ' in ' Manga I want you to animate' of AnimeJapan 2017, which was held immediately after the 5th volume containing the latter half of 'Nada Spider Mountain' was published. It can be seen that it was an expected work from that time.

・ Addition
The weekend results for the 10th week of publication are as follows.

The box office revenue of 'Spirited Away' was 31,680 million yen due to the revival screening in the summer of 2020.