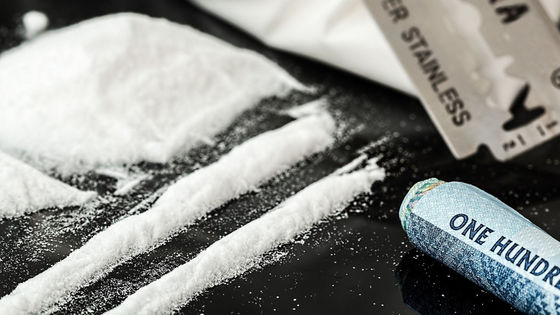 The Senate in Colombia, one of the largest producers of

cocaine , has been deliberating a bill to legalize cocaine (PDF file) since August 25, 2020. Senator Ivan Marlanda answers a question from news media Vice about the current state of deliberations on the cocaine legalization bill.

Coca leaves are an important medical and ceremonial plant for indigenous peoples of the Andes. However, this purified cocaine leaf is synonymous with illegal drugs that have the effect of exciting nerves but cause severe addiction symptoms and mental disorders such as hallucinations. Colombia has outlawed the cultivation of cocaine leaves, but cocaine is produced by criminal organizations in the country, and it is said that it produces 70% of the world's cocaine. It has become.

Cocaine production increased in 2017 to record high in Colombia after the end of the civil war 1 photo International News: AFPBB News
https://www.afpbb.com/articles/-/3232162 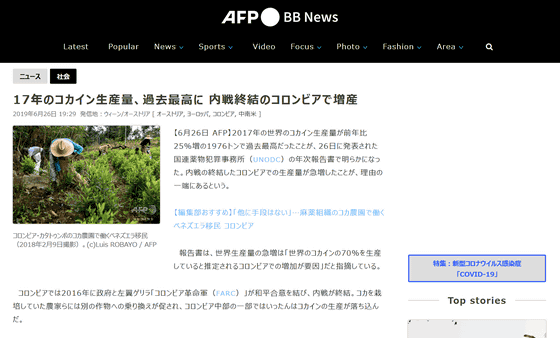 A bill is being deliberated in the Colombian Senate to legalize the cultivation of this coca leaf and require the state to purchase the harvested coca leaf. According to Senator Marlanda, there are three benefits to the law being promulgated.

First, the Colombian government spends 4 trillion Colombian pesos (about 120 billion yen) annually on a program to dispose of illegally cultivated coca leaves, but 2.6 trillion if you buy coca leaves. It costs only pesos (about 78 billion yen), and coca leaves are available. The second is that every time the authorities find it, they run away and protect farmers who grow illegally in new areas. The third is that the forests cut by the fleeing coca leaf farmers are protected. 300,000 hectares of forest are cleared annually in Colombia, of which 25% is estimated to be due to illegal coca cultivation. Cocaine leaves purchased under this new law will be supplied to medical cocaine production facilities. Since cocaine has an analgesic component, it can be expected to have medicinal properties as a drug, but it was difficult for research institutes to obtain cocaine due to its notoriety as an illegal drug. The bill being deliberated will sign a contract with a pharmaceutical company with state-of-the-art technology and the best security protocols to use some of the coca leaves it buys to produce medical cocaine.

Senator Marulanda gave a case law in Colombia that allowed private consumption of cocaine as a human right, noting that Colombia had the freedom to consume cocaine but lacked legal cocaine. There was a problem that cocaine purchased domestically had to be obtained from organized crime groups, and such cocaine was often mixed with poor quality, but legalization eliminates this problem. Said Senator Marlanda. In addition, the purchased coca leaves will be supplied to domestic industries such as food, flour for bread making, pharmaceuticals, and coca tea . According to Senator Marlanda, these industries are often indigenous and have been stigmatized and persecuted by judicial authorities before they could develop, so there is also a compensatory factor for the industry. There is.

Senator Marulanda said that 'opening public dialogue' was the biggest obstacle to enacting the bill, and was only told that drug trafficking was a villain, and that cocaine leaves and cocaine were appropriate. He commented that he hopes that the current situation regarding cocaine and the bill will be widely discussed with Colombians who have not been taught their knowledge. Regarding the United States, which has been cooperating to eradicate cocaine, he said that he was an 'important partner' and asked for his understanding that legalization of cocaine production would be better than the previous war on eradication of cocaine.