Nintendo Switch 'Momotaro Dentetsu-Showa Heisei Reiwa is also a classic!' Review of the latest Momotaro series, a completely new work with many new elements added to the playability of the past work itself 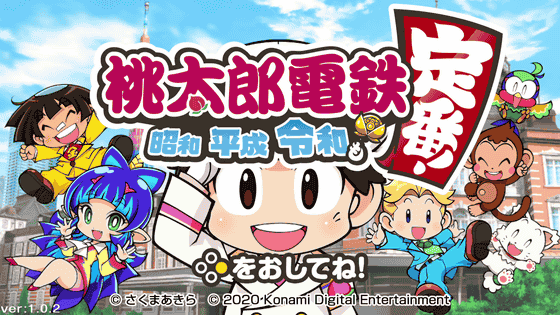 Nintendo Switch is the latest work of ' Momotaro Dentetsu-Showa Heisei Reiwa is also a classic! ' Of the classic '

Momotaro Dentetsu (Momotaro) series ' of party games for home video game consoles that have been enjoyed by people of all ages for over 30 years. Appeared from. I actually played the latest work of 'Momotaro' for the first time in 4 years since the 3DS version and 11 years since the Wii version for 'Momotaro' for stationary game machines.

The Momotaro series, which has been popular for over 30 years, is a game based on the so-called 'Sugoroku'. At the beginning of play, the destination is randomly decided ... Each player rolls the dice and advances through the squares that imitate the Japanese route map by the number of dice. In addition, there are some parts where the actual railway line is not reproduced as it is, such as the connection between Honshu and Shikoku via Awaji Island. 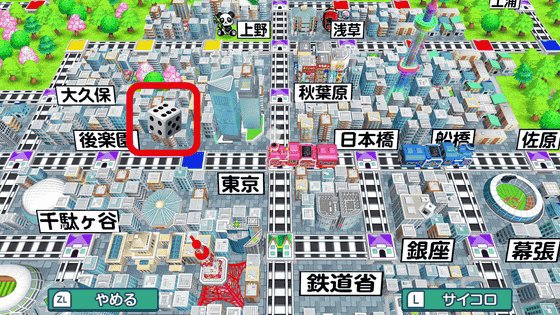 There are various types of cards, including mobile cards such as the 'Nozomi Card' that increases the number of dice and the 'Buttobi Card' that moves to some square, as well as 'You can steal your favorite cards from other players.' There are also attack cards such as 'sword hunting cards'. Since you can have 8 cards regardless of whether you are moving or attacking, it is a simple dice, so not only your eyes, but also when to use the cards and how to keep them at hand will greatly affect your victory. The funds in possession are mainly used for 'purchasing properties' at property stations such as Tokyo Station and Kyoto Station. 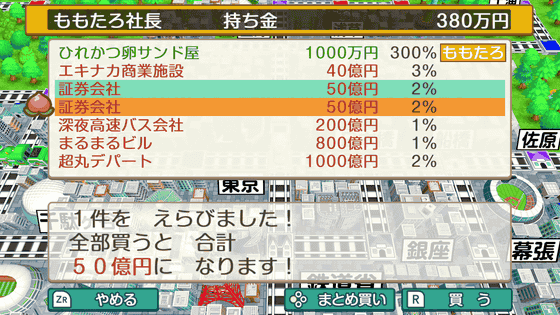 At each station, you can purchase properties according to the location. If you go to Makuhari Station, you can buy popular amusement parks such as 'Tokyo Nesme Land' and 'Tokyo Nesme Sea', as well as 'Start Tomorrow', which is like a company that has a fashion shopping site. Depending on the property purchased in this way, the game progresses in one turn per month from April every year, and when everyone's actions in March are over, it will be a 'settlement'. Since the profit calculated from the price of the property owned at the time of settlement and the rate of return set for each property can be obtained, the next fiscal year will start the action with a certain amount of funds. The rate of return on high-priced properties is not always high, so how to secure a large amount of profit and invest it is a showcase for the president. 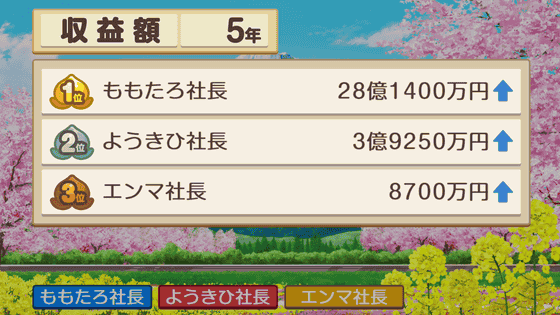 One of the keys to making a profit is 'monopoly', which buys up properties at one station. The profits from the property at the monopolized station will be doubled, so it will be useful even for properties with lower rates of return. In addition, some of the past works had a mechanism to increase the capital of the property to raise the rate of return, but there is no capital increase in this work. Some properties generate extra income through random events. Although it is random, the properties that are likely to occur are decided to some extent, so the point is how to secure such properties. In order to get such a property, you first need something in advance. The amount of subsidy that you can get to your destination first is a certain amount, so it should be useful for company management. Binbogami can be rubbed by overlapping, passing, and overtaking other players. The player who is attached to the poor god at the end of the action is waiting for various treatments from the poor god. Many of the actions, such as buying a card higher than the list price, selling a property without permission, or destroying a card on hand, are a drag on the player. If you fall into debt, you will have to sell your property and you will lose your company's profits, so it is a good idea to avoid being obsessed with the poor god as much as possible. In addition, the poor god can be transformed at random. If you transform into a mini bomby that asks for a small amount of money every month, the damage will be rather minor ... King Bombie, which can be said to be an evolved form, not only throws away a large amount of money, but also gives away a time bomb card that reduces assets and erases the card at hand when it explodes, and also throws away all cards. Yes, the player who was running at the top may drop the ranking at once.

The bad deeds of King Bombie of Nintendo Switch 'Momotaro Dentetsu-Showa Heisei Reiwa is also a classic!-' Are like this-YouTube


In addition, there are guest bombies other than King bombies. 'Big Bombie' doubles the debt by the number of dice. If you don't have enough money, you can't stand the attack. 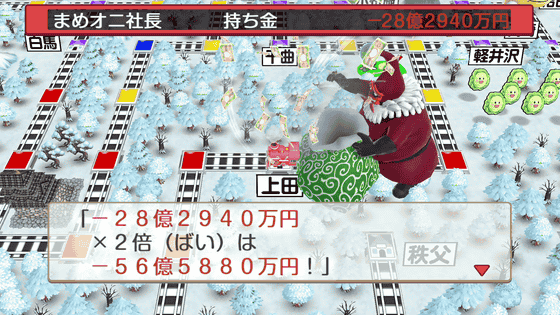 'Pocon', which is King Bombie Jr., blows away the property owned by the player. Since you can choose which one to sell for the property you have, you can put off the exclusive property with a high rate of return, but Pocon does not have such consideration at all, and it will cause considerable painful damage. I will. In addition, if you are near the player with Pokon, you will get caught up in it, so be careful ...

Nintendo Switch 'Momotaro Dentetsu ~ Showa Heisei Reiwa is also a classic! ~' The new form of the poor god Pokon has the ability to blow away properties --YouTube


In addition, 'Destroy' will also appear as the strongest evolutionary form of this work. After normal action, the player obsessed with the Destroy rolls three dice and is forced to move as many times as the number of dice rolls, randomly destroying the moving passing station and surrounding properties. Where to move depends on the Destroy, and it seems that there is a tendency to proceed to exclusive stations and stations with high-priced properties, so if you change to the Destroy in an area with many exclusive stations, it will be a catastrophe.


Many random events are also available. For example, the 'special monster' that was in the conventional series has been re-appeared with more types. There is also 'Oga Peninsula Monster Namahagen', which is disliked by players due to its destructive power. There are also 'historical heroes' who will join as a player's ally if they monopolize the property at a specific station. Each hero has his own feats, so he should help the player in many ways ... The familiar 'Suri no Ginji' from the series also appears in various disguise. A thief who steals any of '1/4', 'half price', and 'full amount' of the player's money, and teaches the lesson that if you get a lot of money, do not carry it and change it to another form Will give you. In addition, it is possible to prevent damage with the 'Pato Card'. 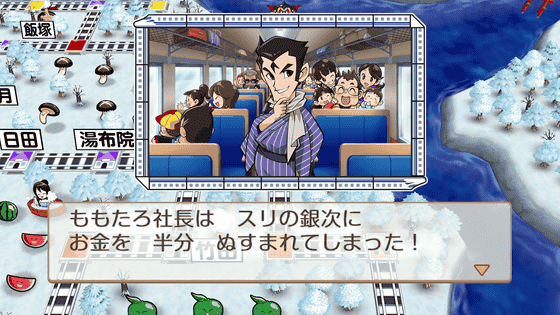 The evil deeds and events of the poor gods often lead to debt, but don't give up. There are multiple debt repayment events, such as the 'Tokusei Ordinance Card' that allows you to make a debt for 0 yen at the card counter, and the local residents collect money when you arrive at your destination. Whether you have a debt of 1 million yen or a debt of 1000 trillion yen, it's a moment when you return it, so you don't have to worry about the amount of debt itself. Since you can have multiple cards, beginners can also use the strategy of 'holding multiple Tokusei Ordinance cards in advance'. When someone reaches the goal, if they are farthest from the goal, they will be obsessed with the poor god, so mobility is essential to reach the goal. If you have a 'Royal EX Card' that allows you to use the effect of rolling the dice 6 times multiple times, you will have an advantage in terms of mobility, but the cards sold at the 'card counter station' differ depending on the station, so it is quite a goal. The situation where the card is not available may continue. The existence of a 'helicopter' is important in such cases. The helicopter of this work seems to be a relief measure that if you stop at the heliport mass with the 'H' symbol, you can fly to any of the four heliports selected from all over Japan for free. It is treated like. In most cases, heliports within 20 squares of the destination will be selected as candidates, so even if you say 'There are 70 squares to the destination ...', you can close the distance at once.

Nintendo Switch 'Momotaro Dentetsu-Showa Heisei Reiwa is also a classic!-' Is a game that believes in miracles-YouTube


However, Mr. Shoji Masuda, the deputy director, just stated in an

interview that 'I think it's a balance that even if you play mahjong with a bad person and a good person, a bad person may win.' This work is a game that makes a clear difference with your skill. Beginners who say 'this is the first time for Momotaro' may continue to get stressed unless they learn the theory of Momotaro. 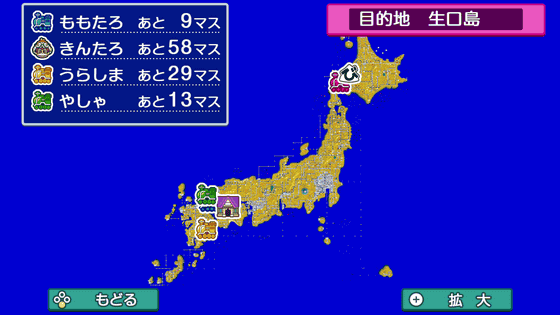 For such beginners, we recommend the 'Momotaro 3 Years Battle!' Mode, where you can choose from 'Momotaro Alone'. This mode starts with an initial fund of 100 million yen and an express tour card / jumping card, and is set to increase the fluctuation of funds such as plus station, minus station, destination arrival fee, etc., for a period of 3 years Fixed mode. No matter what happens, it will be forcibly terminated in 3 years, so if you fight weak COM in this mode first, you will deepen your understanding of the game itself. COM is the weakest 'Mame Oni' that can only roll 1 to 3 dice, and when it is in good condition, 'All card stations change to nice card stations, minus stations change to plus stations, and the amount of plus stations is 5 times the normal amount. In addition, it has an official cheat of '6 dice without a card', and 'Sakuma' modeled after Akira Sakuma, the creator of the Momotaro series, who can only think that he is clearly playing with the dice at normal times. There are even 'masters'. Each COM has various personalities and abilities, and not only simple strength but also individuality is established. In addition to the 'Momotaro Dentetsu' and 'Momotaro Dentetsu' modes where you can gather and play against your friends, there are also modes such as 'Momotaro Net' where you can play online. The game period can be set from 1 year to 100 years, and the estimated play time is about 2 hours in 5 years. Depending on the setting, it will be a long time, but you can change the set number of years during play and let COM take over the play, so you can start playing comfortably. As for the Momotaro series, the BGM, SE, operation interface, etc. are almost the same as the past work, so it can be said that the only change is that the character design has changed from Takayuki Doi to Hideyuki Takenami. In terms of balance, it seems that the difference is less likely to spread than in past works, but as I play more and more, my knowledge increases, 'I will give priority because there are many good properties at this station.' 'Dare to give up the goal, I felt that the goodness of Momotaro was inherited as it was in the depth of being able to grow so that a wide range of tactics could be considered, such as 'Let's collect cards.' The Nintendo Switch 'Momotaro Dentetsu ~ Showa Heisei Reiwa is also a staple! ~' Can be purchased at Amazon.co.jp for 5664 yen including tax at the time of article creation.