Katsuya from two types of ingredients new work of both enjoyed fit prime series 'oodles of bacon and chicken cutlet of fit prime' has appeared on November 19. It is said that you can enjoy a large amount of bacon with classic chicken cutlet and black pepper at the same time, so I bought it immediately and tried it. This is the 'Donburi lunch box with a lot of bacon and chicken cutlet' that I brought back. Chicken cutlet and bacon are placed so much that you can't see the rice below. Chicken cutlets and bacon are placed directly on top of the rice. It is said that the classic tamari soy sauce is used for chicken katsu, and it has an appetizing scent. Shredded cabbage and mayonnaise were also served in the corner. At first glance, it seemed that there were few ingredients, but when I dug it out with chopsticks, cutlets and bacon popped out one after another. When I counted it, there were 6 chicken cutlets and 10 bacon. First of all, I will eat bacon. The juicy gravy that spreads in your mouth goes well with the aroma of black pepper. The bacon was fairly well baked and some were crispy. Next, when you eat a bite of chicken katsu, you will feel the crunchy texture of the clothes and the faint aroma of soy sauce. The meat was well seasoned, and the taste of soy sauce was not too strong and kept a good balance. The meat is tender and sliced, and when eaten with rice, it is very satisfying. The cabbage served with cutlet and bacon is perfect for retouching. I didn't feel the oiliness of chicken cutlet or bacon so much, but the vegetables made my mouth refreshed. I ate chicken cutlet luxuriously wrapped in bacon. You can enjoy the crispy feeling of chicken and the juicy feeling of bacon at the same time, and there is no doubt that meat lovers will be satisfied. I was able to taste both of them firmly without the taste of one being too strong. 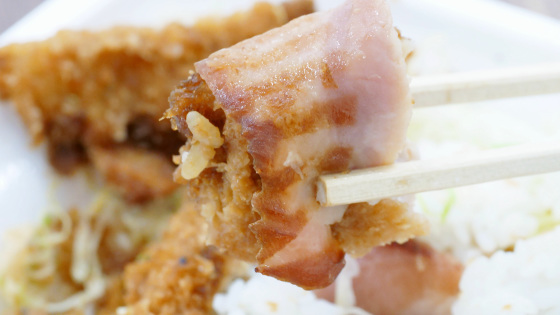